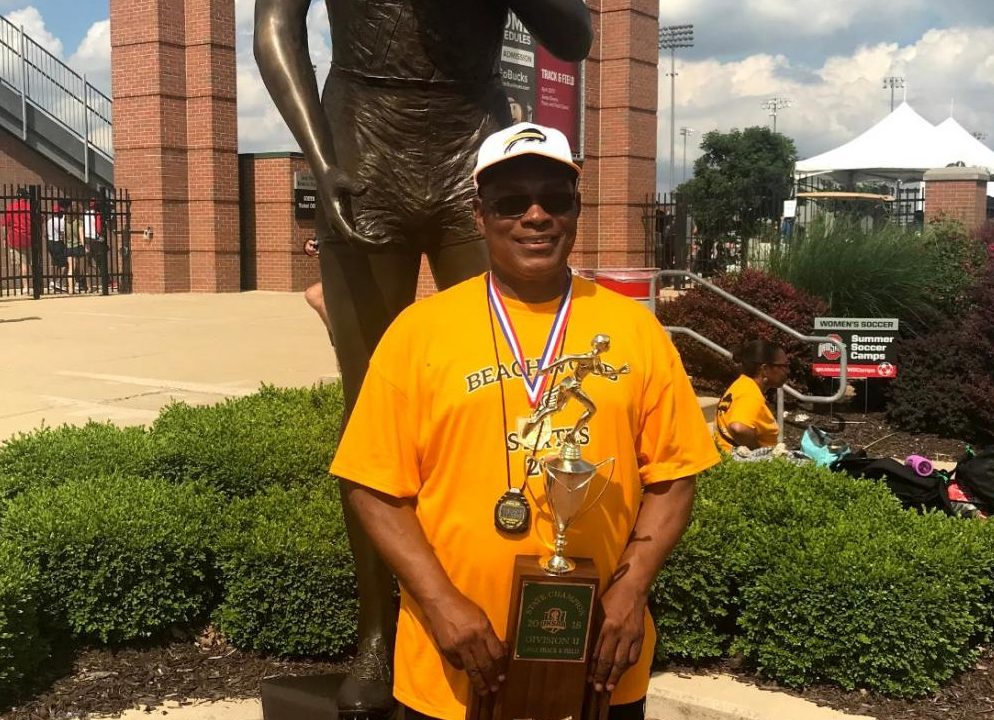 In 23 years of coaching at Beachwood, Smith has led his teams to six state championship titles in track and indoor track

Beachwood Track Coach Willie Smith was informed by the Ohio Association of Track and Cross Country Coaches (OATCCC) in February that he was selected as national Coach of the Year.

Senior Shayna Preisler was not surprised to hear about Smith’s award.

“When I saw that Coach Smith had won the coach of the year award I was elated, but not surprised,” she said. “Coach Smith is the most supportive coach I’ve ever worked with, and his training plans are extremely effective.”

“Coach cares about all of his runners as his own kids in all aspects of our lives, not just at track practice,” she added. “No one deserves this award as much as our Coach Smith.”

In December, the OATCCC had selected Smith as state Coach of the Year.

Smith thus received three honors: state, sectional and national Coach of the Year. Only two coaches get selected annually for each award: one boys coach and one girls. Although he coaches both boys and girls teams, these awards are for coaching girls.

I surely would not be the person I am today without his guidance. His compassion for athletes and his personal mission of making them successful in every aspect of life is why he deserves this.”

In his 23 years of coaching at Beachwood, Smith has led teams to six state championship titles in track or indoor track, but in spite of his athletes’ incredible accomplishments, he feels that winning isn’t everything.

“The winning takes care of itself, we don’t talk a lot about it,” he said.

For Senior Jack McPhillips, Smith’s record speaks for itself.

“I think he truly deserves the award because of his long-lasting success,” he said. “He’s coached a lot of winning teams at Beachwood and you don’t have [that] success without being one of the best.”

“His coaching has transformed me into a better athlete on top of being a smarter competitor,” McPhillips added. “His coaching goes a lot farther than just training. He really teaches you how to be the best you can be and how to win.”

Smith emphasizes the importance of connecting with students.

“[My approach to coaching is to be] relevant and to relate to the new students who come into the program,” he said. “[I look for] ways to encourage and motivate them to be the best they can be so that when they’re done with their career they can be glad that they were part of the track team.”

He focuses on effort.

“We talk about …reach[ing] down inside to pull out every fiber of competitiveness and effort they can give… [We] can live with that regardless of the result, because once you give your best, that’s all you can give,” he added. “Nothing else really matters.”

“We generally care about one another,” Smith said. “We’ve been very successful as a program, but we don’t talk a lot about it. It’s a culture that’s been established over the years.”

He tries to view each athlete holistically.

“It’s not just about what they offer but…making their load less burdensome, and making it easier to navigate through their personal problems and issues,” he said.

“I think [my students] know we are sincere about caring about them, not just because they are track athletes but because they are valued students,” he added. “That’s something that parents often talk about to me and the other coaches, how much they appreciate our attempts to help their child outside of the track. We do the best we can.”

We talk about …reach[ing] down inside to pull out every fiber of competitiveness and effort they can give… [We] can live with that regardless of the result, because once you give your best, that’s all you can give.”

“Anyone who has been coached by Coach Smith was not surprised he received such a high honor,” he said. “He’s a strategic, trustworthy, and helpful coach who always understands what’s in your best interest even before you may.”

“I admire his temperament and ability to put his philosophy of building others up into action each day,” Perryman added.

Smith feels fulfilled when athletes transfer the values they have learned in athletics to be successful in life.

“[This] doesn’t mean that one will become the president of the United States or a billionaire,” he said. “[It] means that an athlete can learn to navigate and handle life successfully, honestly and fairly with the best effort they can give as a spouse, parent, leader of their family and contributing member to society.”

“[W]hen [their goals] aren’t realized, it’s difficult for me to not feel some sadness,” he said. “I tend to take that personally because I’m the head coach. It’s a lot of responsibility to try to help every kid.”

“I think that my coach 100% deserves the award and even more,” she said. “He’s one of the most amazing people I’ve ever met. It impacted me to know that I’m a part of his success and I helped make his dream come true.”

Class of 2018 runner Mia Knight led the team to multiple state titles in 2017 and 2018 and won an astounding 20 state championship medals for Smith. She now runs at the University of Pennsylvania, where she continues to accumulate accolades.

Knight described how Smith’s coaching has impacted her not only in her athletic career, but outside of the track.

“Coach Smith is probably the most deserving coach of this award,” she said. “He has changed the lives of so many athletes both on and off the track.”

“I surely would not be the person I am today without his guidance,” she added. “His compassion for athletes and his personal mission of making them successful in every aspect of life is why he deserves this.”