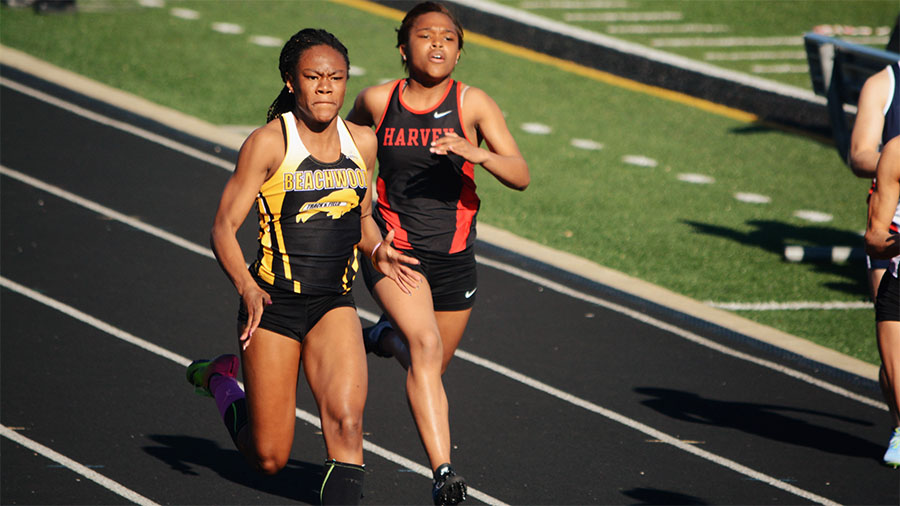 Before this year’s postseason even got underway, Knight had already earned 17 state tournament medals from indoor and outdoor track. Photo by Elizabeth Metz

Before this year’s postseason even got underway, Knight had already earned 17 state tournament medals from indoor and outdoor track. Photo by Elizabeth Metz

As the school year nears the finish line, senior Mia Knight is already on the winner’s podium.

The success that Knight has brought to the school is incomparable. Not only is she the greatest track star in BHS history, but she has also led her team to unprecedented success.

Additionally, she led the team to the Indoor Track State Tournament during both her junior and senior years.

Before this year’s postseason even got underway, Knight already earned 17 medals from indoor and outdoor track.

It’s apparent that her success transcends track, but the journey to success had to start somewhere.

“I realized I had a love for track after my 8th-grade season,” Knight said. “Despite all the hard work that comes with it, I had formed a bond with not only the track but with some of my teammates as well.”

That bond stuck as Knight and her teammates evolved the track program into the dynasty it is today.

“The first three years of my high school career have been amazing,” Knight said.

Knight commented on the fact that Beachwood’s track team has succeeded against larger schools with more athletes competing.

“We are small but very mighty, and it definitely gives us a lot of confidence,” she said. “And it gives other kids who are coming up into the high school confidence that we have one of the best programs in the state.”

Knight attributes her motivation to succeed to her natural competitive drive as well as the trust she has with her teammates.

“Even if I do not have a strong day on the track individually, I always want to do my best for my relay and my team,” she said. “Having such a supportive team around you makes all the pain worth it and it also helps you to push past the pain.”

We are small but very mighty, and it definitely gives us a lot of confidence. And it gives other kids who are coming up into the high school confidence that we have one of the best programs in the state.”

But this past year, Knight and the track team, as well as the whole Beachwood community, lost a beloved member.

Abby Bendis’s passing hit the Beachwood community like a wrecking ball, but Knight is using that feeling as motivation to succeed this track season.

“What motivates me now is still my team, but also the loss of a teammate in December,” Knight said. “It has been pretty hard for us this season, but we rely on and support each other to get through it and not only run for ourselves but run for Abby too.”

Knight’s determination is on display in the classroom as well. She has taken a full load of honors and AP classes.

“I met Mia freshman year in Mrs. Mathews study hall, and I told her that not very many African American and Latina women take AP physics…  so then she made it her goal to take that course,” physics teacher Michael Lerner said.

Her sophomore English teacher Todd Butler reflected on what he saw when Knight was in his class.

“Determination, pride and humility [are what make her successful],” Butler said.

“I’m honored to have been able to teach her, and I appreciate her drive and her great sense of self to become a successful individual,” he said.

In September of her senior year, Knight declared her intention to take her talents to the collegiate level, accepting a scholarship to run track at an Ivy League school, the University of Pennsylvania.

Knight explained what it was like to be such a heavy track recruit and making her decision to attend the University of Pennsylvania.

“The recruitment process took two different paths: the traditional NCAA D1 process, and then the Ivy League process,” she said. “In the Ivy League Conference, I was being recruited by Brown, Harvard and the University of Pennsylvania.”

My best memories are being with my teammates every day and essentially all day on the weekends… coming back from a weekend meet and dancing in the parking lot with them,  or when we go out for team dinners, those are always the best times, and I will definitely miss them when I leave.”

Unlike other Division 1 schools, Ivy League schools do not give athletic scholarships. Additionally, their admissions offices will not green light recruitment unless academic standards are met.

“For Penn, I had to submit my college application before my official visit, which was at the end of September,” Knight said. “I am a very decisive person, so following my visit to Brown I submitted my application to Upenn, visited the next week and committed.”

“I was [also] being recruited by the University of Michigan, Notre Dame and Georgetown University,” she said. “However, after unofficial visits to various schools, I felt Upenn was the best choice academically and athletically… for me.”

After almost four years of running track at BHS and setting the bar for future Beachwood BHS runners, Knight says her favorite memory would have to be winning the 4×100 relay her sophomore year and then repeating it the following year and winning the state title.

But Knight’s teammates have kept her going by providing constant support.

“My best memories are being with my teammates every day and essentially all day on the weekends,” Knight said. “Coming back from a weekend meet and dancing in the parking lot with them,  or when we go out for team dinners, those are always the best times, and I will definitely miss them when I leave.”

At publication, Knight has qualified to compete at the Regional meet in the 100 and 200, as well as the 4×100 relay. The meet will be at Austintown Fitch High School beginning on Thursday, May 24.

This year’s OHSAA Track & Field State Meet will be held at OSU’s Jesse Owens stadium on June 1 and 2.

Knight’s full tally of high school medals will not be known until then.

All photos by Elizabeth Metz