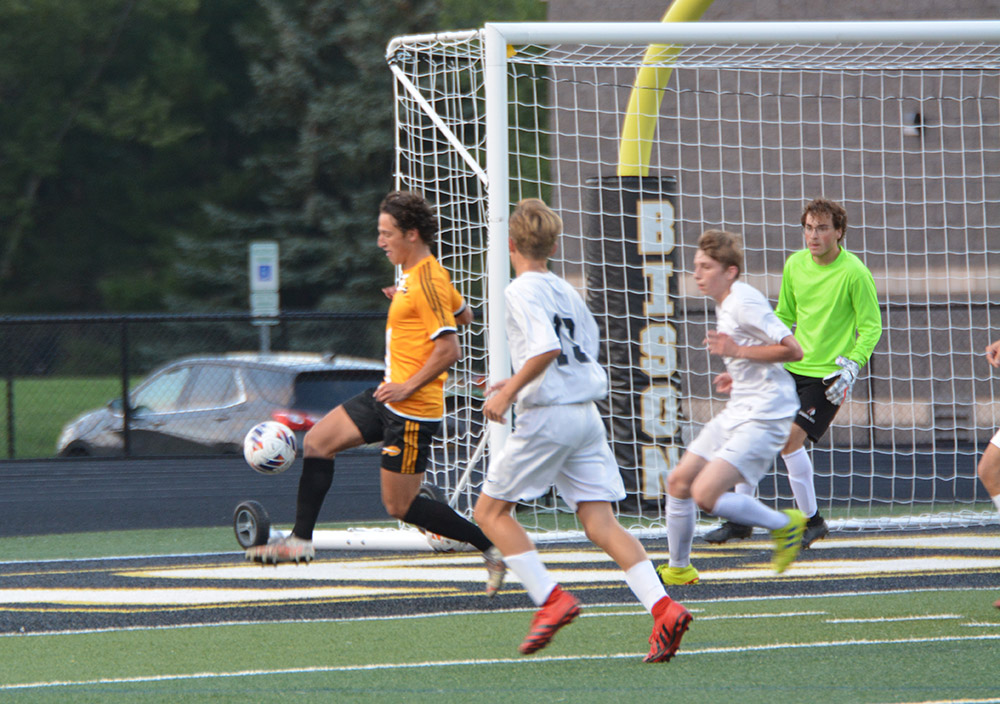 Coming off an impressive season with a 13-2-1 record (undefeated in conference play) the Bison kicked off the playoffs as the number one seed and defeated Cuyahoga Heights 6-0 in the first round on Oct. 20.

Sophomore midfielder Grant Keilin is pleased about how the team has come together this year.

“What’s contributed most to our success is our team work,” he said. “You know our whole team knows each other really well; we have a great bond, and with the help of our coaches and practice every day we are able to score goals and win games.”

It has been a historic season for the Bison, who have broken two school records this year.

“We have managed to win the most games in a row without losing and most wins in regular season, so it’s been a pretty great season for us,” Keilin said.

Given the team’s top seed in the playoffs, they will not hit their toughest competition for a few games, but Keilin hopes they can stay humble and focused. Keilin is most concerned about Kirtland.

“Even though we beat them 4-1 last time, I have a feeling that our team is going to come in there with the mindset that we have already beat them once, we are going to beat them again,” he said. “But we have to make sure to keep our heads on straight and get the job done.”

The team has achieved their impressive record this year with a young roster. Earlier in the season senior midfielder Mike Keselman was excited about players who had stepped up from JV and showed a lot of talent, including center back Kyle Bennet.

“[Bennet] has been playing very calmly and really holding his own back there and playing well,” Keselman told the Beachcomber in early September.

Another young player who has held his own this year is goalie Josh Rosenblit.

“Josh Rosenbilt has been very key,” Keilin said. “Last year we lost our senior captain Jake Muencz, he was a great goalkeeper, and Josh only came off of JV playing keeper only one year. He wasn’t that experienced, but during practice he has just been really improving.”

We have managed to win the most games in a row without losing and most wins in regular season, so it’s been a pretty great season for us.”

Players will come away from this season with a lot of great memories, but one of the highlights was being crowned CVC Champions.

“The Wickliffe game was for the conference championship, and we played really well,” Keilin said.

Keilin described the best moment of that game being a highly technical goal involving a number of players assisting and junior Ozan Sasmaz finally tapping the ball in.

“[It was] one of our best goals of the year with a great passing link-up leading to the goal,” Keilin said.

The Bison continue their playoff run at 6:00 tonight at home against Loudonville (3-7-1).