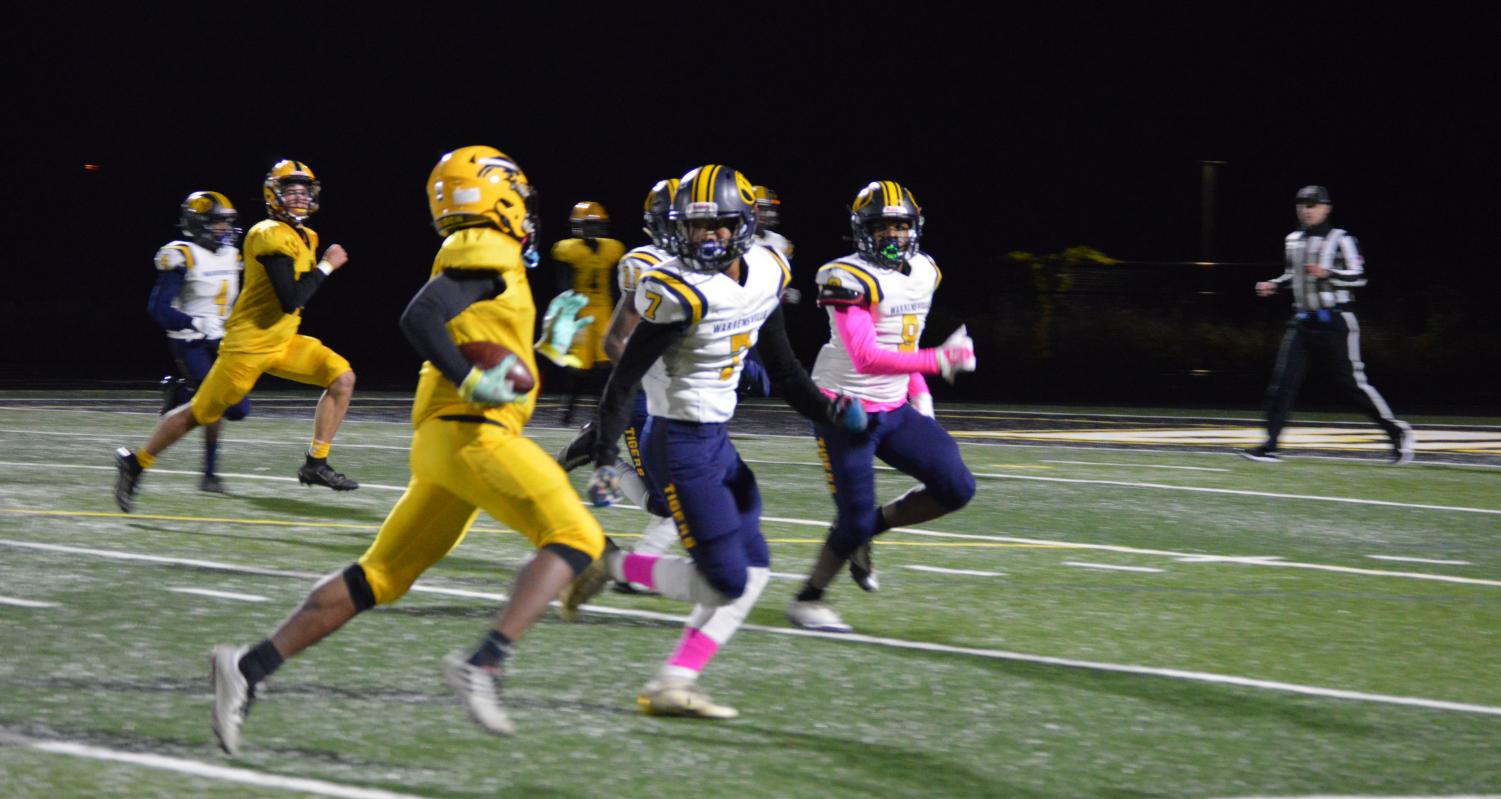 Bison Defeat Warrensville Tigers, Advance to Third Round of Playoffs

This season marks the first time in school history that the Bison finished the regular season undefeated and advanced past the first round of the playoffs.

The Bison football team defeated the Warrensville Tigers in the second round of the playoffs at home on Friday night 28-8.

Warrensville started the game with a lot of pre-snap penalties. However, the first drive of the game resulted in a 33 yard touchdown run by Warrensville quarterback Will Smith. The two-point conversion was good as well. Warrensville took an early 8-0 lead.

The Bison did not take too long to answer with their first touchdown. Junior quarterback Jalen Minter dropped back to throw, saw nothing open, and decided to take it upon himself.

Minter dodged defenders before reaching the end zone on a 59-yard touchdown. The limited number of fans in the stands went crazy, banging on the bleachers.

Senior kicker Liam Torres made the extra point. The score was 8-7 relatively quickly, still with 8:29 left in the first quarter.

On the very next Warrensville possession, missed tackles by the Bison resulted in a big 32-yard run. However, the Bison stopped the Tigers in their tracks on a fourth down. Beachwood regained possession with a chance to take the lead.

But Beachwood was shut down as well, resulting in a Jalen Minter punt.

Warrensville started to gain some momentum until senior safety and wide receiver Ben Desatnik intercepted QB Will Smith. The team gave him high fives and shoulder bumps, but now it was time for the Bison to take the lead. 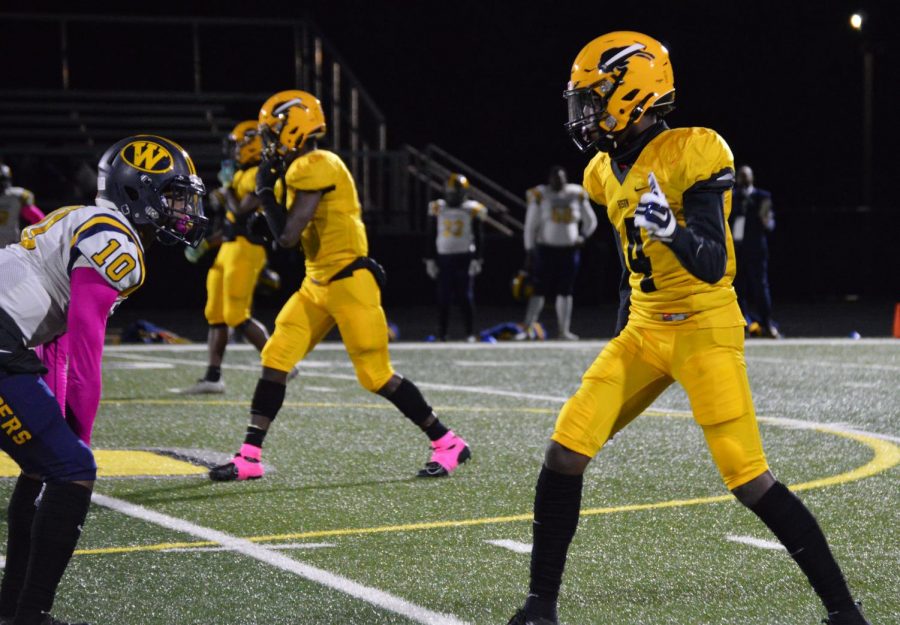 A Ben Desatnik catch led the Bison down to the two yard line. The very next play, senior running back Kendyn Wiggins ran in a two-yard touchdown. With the extra point through the uprights, the Bison took the lead 14-8 with 31.8 seconds left in the first quarter.

Heading into the second quarter, Warresnville was focused on getting past the Bison defense. But Bison defenders once again stood tall and forced a Warrensville punt.

Although the next Bison possession ended up as a punt, Jalen Minter connected with freshman wide receiver Kyler Wiggins on a deep pass.

The Bison defense continued to dominate the Warrenville offense, resulting in yet another Warrensville punt.

Warrensville returned the favor and Beachwood was forced to punt. With under two minutes left before halftime, the Tigers were on a mission to tie the game.

The Tigers had no timeouts left though, and with a sack from sophomore Marcus Moore, Jr., the clock kept ticking. As Warrensville hurried to the line of scrimmage, they snapped the ball, and senior linebacker Derric Minter came out of nowhere and sacked Smith, sending the game into halftime.

As the third quarter opened, the Bison worked hard to gain momentum, but were shut down.

Jalen Minter was intercepted on a deep pass by Warrensville’s defensive back William Smith Jr.

Once again, the Bison defense forced yet another Warrensville punt and the Bison offense took over with 5:40 left in the third quarter.

The drive started with a boom. Jalen Minter connected on a deep ball with Senior Desmond Horne, Jr. Kendyn Wiggins continued that momentum with a first down.

It was weird to only play four regular season games because of starting late in an already shortened season, but to be the first undefeated team in school history is a really good feeling. ”

But soon the Bison were faced with a fourth down from the 27 yard line. Warrensville’s defense bent but did not break, and the Tigers broke up a Jalen Minter pass with 1:59 left in the third quarter.

Warrensville was driving with the ball entering the fourth quarter, hoping to tie the game.

The Tigers fumbled the ball, but then got it back. It did not take too long after this before Jalen Minter intercepted the ball and the Bison started their possession from their own 37 yard line.

The Bison then hurt themselves with a penalty, but that did not seem to matter.

Jalen Minter launched the ball in the direction of Kyler Wiggins. Two Warrensville defenders were right there and reached their hands up for the ball, but it somehow ended up in Kyler Wiggins’ hand for a huge 73-yard touchdown.

The extra point by Torres was good, and the Bison took a 21-8 lead over the Tigers with 5:42 left in the fourth quarter.

Time for the Tigers to come back seemed to be running out. Especially when the ball was tipped on a Will Smith pass and then intercepted by Kyler Wiggins. The Bison offense took over with 4:30 left in the fourth.

Jalen Minter ran the ball for 32 yards down to the 10 yard line. Shortly after, Desmond Horne, Jr., ran the ball into the end zone. The extra point was good, once again, and the Bison were suddenly winning 28-8 with only 1:35 away from a Beachwood playoff victory.

Of course, the Bison defense forced a fourth down fail as the time expired and the crowd went crazy.

The Bison (6-0) are advancing to the third round of the playoffs and will face off against Canfield South Range (9-0) on Saturday, Oct. 24th.