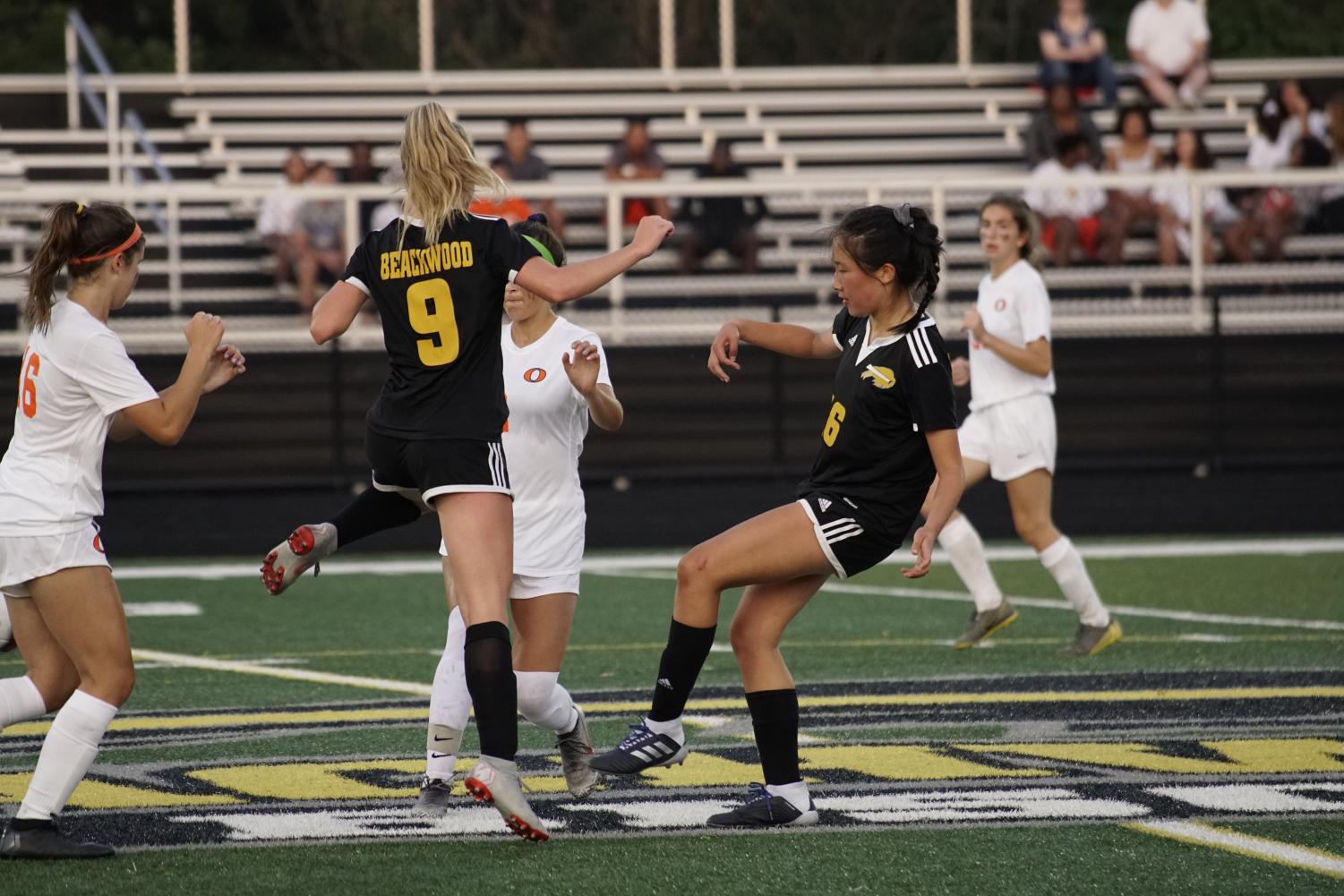 Sunny Wang fights for control of the ball in last year’s Orange game. (Photo from bcomber archives by Matthew Keyerleber)

Sunny Wang fights for control of the ball in last year’s Orange game.

After months of preparation, fall athletes faced the prospect of a lost season. Then the governor made an announcement.

Athletes were looking forward to their fall season throughout the summer.

But in late July, Beachwood Athletic Director Ryan Peters emailed students to notify them that the Cuyahoga County Board of Health (CCBH) recommended that sports discontinue until students are allowed to go back to school in person.

By the end of August, athletes learned that their seasons would continue after all, but for a long month, athletes who play fall sports thought they would never be able to see their months of hard work and dedication pay off.

Senior linebacker Andrew Baker said he was hurt when the news originally broke.

“Going into my senior season, I was looking forward to seeing my eight years of football pay off,” he told the Beachcomber in August.

Baker was disappointed about missing his last rivalry game with Orange and other senior milestones.

Senior wide receiver Ben Desatnik wasn’t too surprised when he heard that their season was getting cancelled.

“It was definitely disappointing, but there are worse things going on in the world right now so I’m trying to stay positive,” he said. “Obviously I was upset, but it wasn’t like we [didn’t know] that there was a good possibility that it would get cancelled.”

While it is obviously disappointing to have my senior season discontinued for the time being, I understand that safety and health are priorities.”

“While it is obviously disappointing to have my senior season discontinued for the time being, I understand that safety and health are priorities,” she said at the time. “I believe that they are trying to do the best to impede the spread of COVID.”

“Our coach [conducted] online zoom workouts three to four times a week,” he said. “Each time we [signed] in from our respective locations and [worked] out for about an hour.”

“While these circumstances are not ideal, I certainly appreciate the opportunity to work out with my team— even if it’s not in-person,” he added.

Senior boys soccer player Lorenzo Tovanche felt that these workouts were not adequate to improve in the sport.

“These sessions would be better than nothing,” he said. “However, fitness sessions alone are not nearly enough for an athlete to get better at their sport.”

Tovanche felt that athletes in fall sports should practice individually to substitute for a regular team practice schedule.

Junior girls’ tennis player Grace Yan echoed many who would miss the camaraderie and competition.

[Online] fitness sessions alone are not nearly enough for an athlete to get better at their sport.”

On Aug. 25, Superintendent Dr. Bob Hardis sent an email to fall athletes explaining that the season would be back on since the school was scheduled to reopen for in-person learning on Sept. 14.  Later, this date would be pushed back to the 21st.

Baker reflected on his initial reaction to the season being back on.

“I’m extremely happy,” he said. “Especially with the new playoff format where every team makes the playoffs. I’m so excited to get one last chance to make a playoff run.”

Desatnik also explained his thoughts on the emotional roller coaster of a summer.

“It has been really tough,” he said. “The thing is that I have been sort of expecting every decision that the school has made…” “so I have not been too surprised.”

Peters explained how there are likely to be fewer games this year.

“For many reasons the seasons are going to be shortened,” he said. ”You can’t get all the games in and you can only play a certain number of games per week.“

The post-season will look different this year as well, especially for the football team.

“Everybody gets into the playoffs for football,” Peters said. “We had let the state know that we are interested in playing in the playoffs. Some schools are opting out as well, which is understandable.”

I’m extremely happy. Especially with the new playoff format where every team makes the playoffs. I’m so excited to get one last chance to make a playoff run.”

There is also the unique possibility of regular season games after the playoffs.

“Once you are knocked out of the playoffs [for football], you can play [regular season] games after the playoffs,” he added.

Peters explained how the Cuyahoga County Board of Health (CCBH) and the Ohio Department of Health (ODH) gave Beachwood direction from the start.

“We followed their guidance,” he said. “There was a meeting where the Governor announced that he was allowing fall sports to go forward with competitions. Once the Governor gave the health order from the ODH, it changed things. ”

Peters described the protocols that Beachwood rolled out in the summer to help keep people safe.

“When players and coaches walk up to the school, they need to be wearing a mask,” he said. “There are symptom checks when players walk up where coaches will take their players’ temperature.”

Coaches have received training on the health protocols.

“There is also a series of questions that coaches must ask their players,” he added. “One of the questions is whether you have been in direct contact with anyone that has COVID.”

Football games, soccer games, basketball games, wrestling matches all worry me. The thing is, if everyone is doing their part by wearing masks, washing their hands, and social distancing then we will be in good shape.”

“We are limiting the number of spectators that can attend games,” he said. “The governor’s order allowed a maximum of 15% of the total seating capacity.”

“For football and soccer games, each kid is permitted two passes per game to give to their families,” he added. “The 15% does not include players or game workers.”

It is likely that students will have trouble getting tickets to sporting events this year.

“Once we do our pre sale tickets, if there are still tickets available, then the morning of the game we will open up the rest of the tickets for general admission,” Peters said.

Peters explained how the athletics department is ensuring that fans are social distancing.

“We went through all of our venues and marked where people can sit,” he said. “You are going to see blue painters tape on certain seats and that indicates where you can sit so everyone can social distance.”

But there will also be a new way for students to watch fall sports.

“We are going to try to live stream the games and put them on Bison TV,”  Peters said. “It won’t be the same, but that was one thing we were really trying to do to allow people to watch games.”

Peters admits that he does have some concerns.

“Riding a bus does pose some concerns for me and for our athletes,” he said. “There are families that are scared of their kids taking bus rides and that is totally understandable.”

“Parents can take their kids to their games as long as they let us know and get approval,” he added.

Contact sports pose the greatest risks of spreading the virus.

If someone on a sports team contracted the virus and was in close contact with everyone on the team, then we would have to quarantine the entire team more than likely for 14 days.”

“Football games, soccer games, basketball games, wrestling matches all worry me,” Peters said. “The thing is, if everyone is doing their part by wearing masks, washing their hands, and social distancing then we will be in good shape.”

“We work very closely with the Cuyahoga County Board of Health and we seek their guidance,” he added. “In these specific instances when we got the all clear, we were able to resume practice.”

Peters continued and explained what the plan would be if a student or coach were to test positive.

“If a student or a coach had COVID, then everybody that was in contact with that individual would be sent into quarantine,” he said. “For example, if someone on a sports team contracted the virus and was in close contact with everyone on the team, then we would have to quarantine the entire team more than likely for 14 days.”

“We would be following the guidance from the Cuyahoga County Board of Health along the way,” he added.

Peters discussed his plans for the winter and spring seasons.

“It is a little early, but right now the plan we put into place is solid,” he said. “There is not too much guidance yet from the OHSAA regarding winter and spring sports.

“The symptom checks and everything we are doing now will remain the same,” he added.

“Our kids and coaches have done an amazing job during this process,” he said. “It’s hard. Social distancing is hard and wearing a mask is uncomfortable. It is a way of changing the ways we have been doing things.”