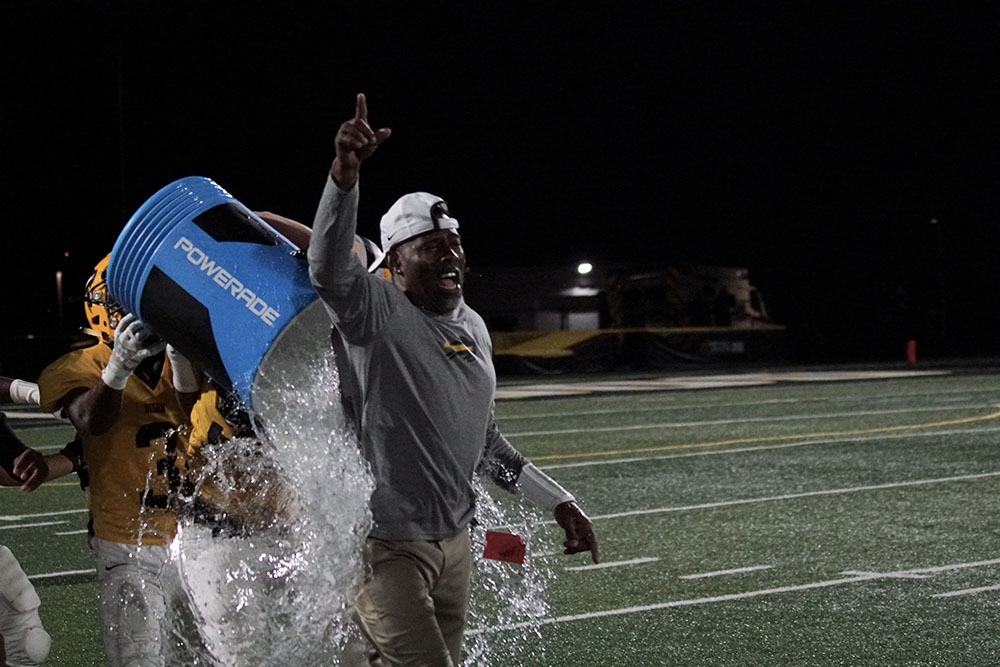 Coach Creel gets drenched in ice water after the first Bison win of the season over Orange. (Matthew Keyerleber)

Coach Creel gets drenched in ice water after the first Bison win of the season over Orange.

The Long Road to the Playoffs

The Bison football team had a dramatic season, finishing with an 8-3 record and a playoff bid for the fourth time in school history.

“The amount of support we had made it very special,” Coach Damion Creel said. “Going through adversity was really challenging, but it made the season even more memorable.”

The season started off with a bang, breaking the 11-year losing streak against crosstown rivals the Orange Lions.

“We went into the Orange game ready, and we fought to the end,” senior defensive tackle Antonio Roscoe said.

The team won the dramatic and emotional game 27-25. The atmosphere at BHS stadium was electric. This was indeed a great start to the season.

“Beating Orange was one of the greatest moments for me throughout my four years of playing football,” senior tight end Ahmonra Ballard said. 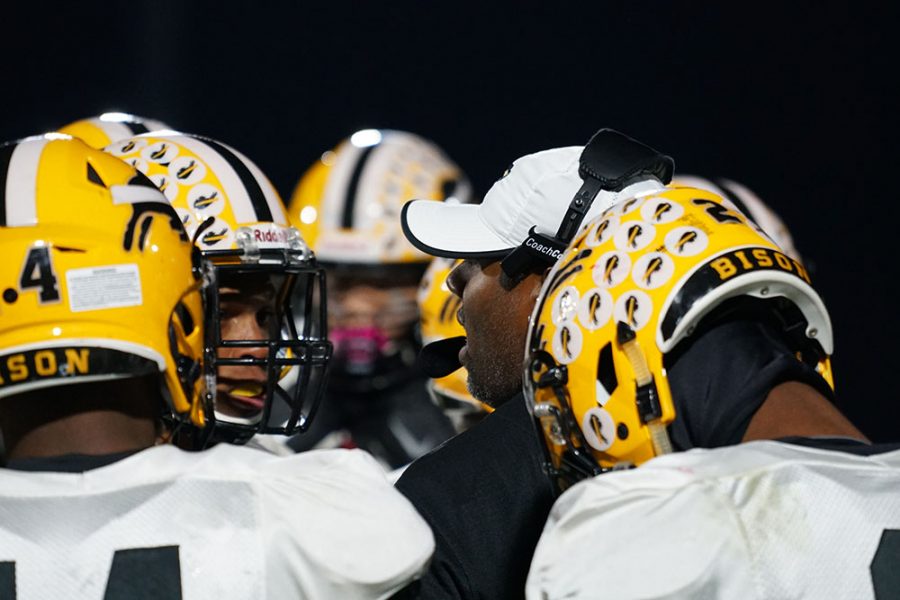 Those cleats must’ve helped the Cowboys with their 61-20 win over Beachwood.

The Bison would not lose another game for six more weeks.

Games three and four were blowouts for the Bison. Beachwood traveled to Collinwood and won 34-0, and the following week traveled to Grand Valley to win 49-0.

With a 3-1 record, the Bison faced Independence and won the game easily with a score of 41-10.

Beating Orange was one of the greatest moments for me throughout my four years of playing football.”

The next week, the Bison scraped away a 20-13 victory for Wickliffe on Wickliffe’s home turf.

The Bison showed up for their Homecoming game as they put up 57 points against Cardinal and only allowed 7.

The Bison’s biggest challenge of the season was against the defending state champs, the Kirtland Hornets.

Before Kirtland’s game against Beachwood, they had allowed only 6 points on the whole season.

In the battle between the Hornets and the Bison, the Bison put up 14 points. But the Hornets offense was too overpowering and put up 49 points on their home turf. The final score was 49-14 for Kirtland.

The Bison would finish their regular season with two wins at home:  a 43-13 win over Berkshire and a 70-26 win on Senior night over Hawken.

The playoff game was intense, and we were locked in. Unfortunately, the game didn’t turn out how we wanted it to, but we fought our hardest.”

The Bison qualified for the playoffs and made the two-hour bus ride to Oak Harbor on a frigid Saturday night, but lost 41-7 to the Rockets, ending the season.

“The playoff game was intense, and we were locked in,” Roscoe said. “Unfortunately, the game didn’t turn out how we wanted it to, but we fought our hardest.”

“We had a successful season,” Ballard said. “Obviously, I wish we could have gone farther in the playoffs, but the team got stronger throughout the season and we learned how to really be a team.”

“Next year, I’m looking forward to continuing our success,” Creel said. “It’s going to be a brand new team.”