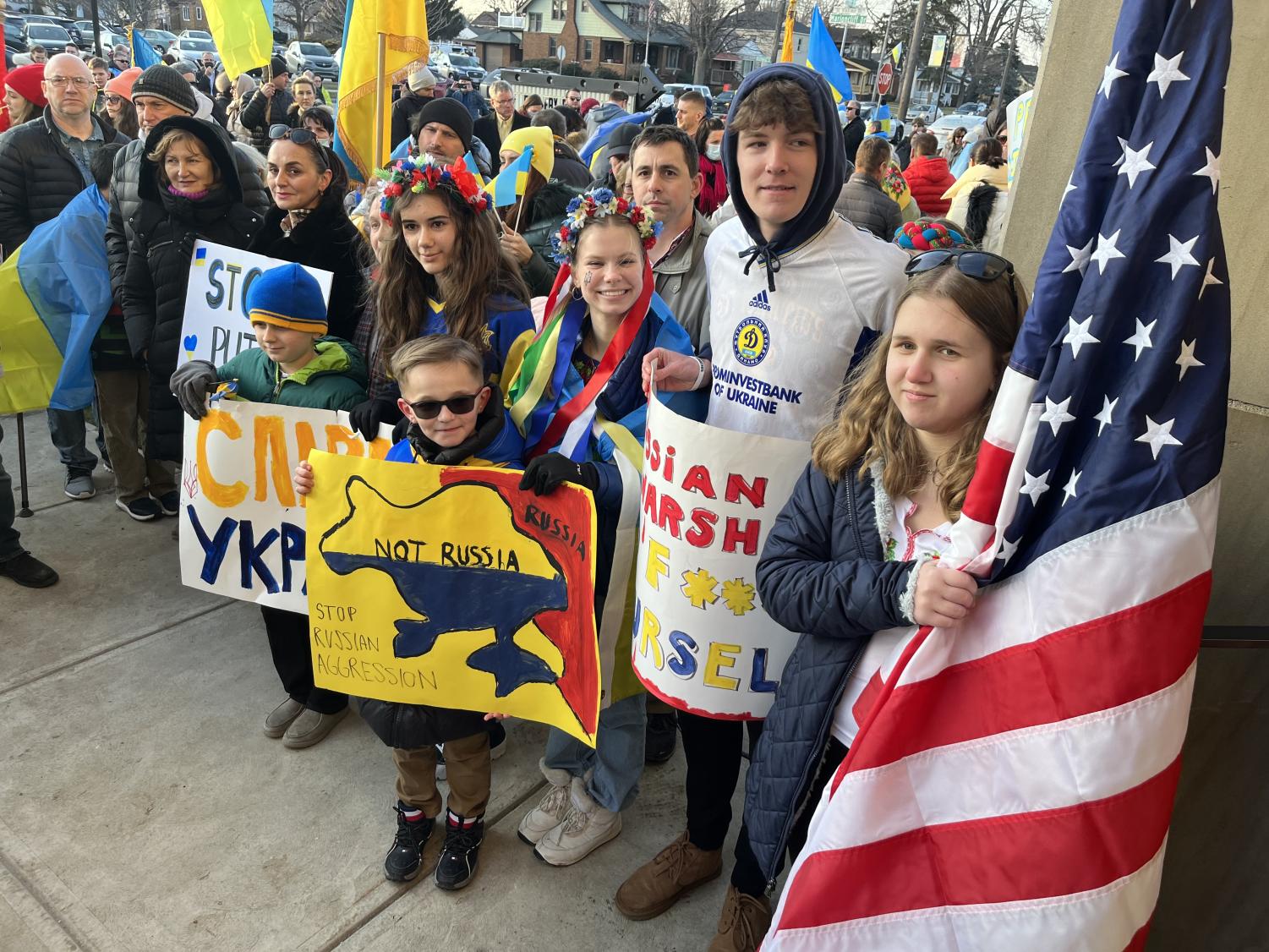 How the War in Ukraine is Affecting People in Northeast Ohio

The reverberations of the war in Ukraine are being felt by many in Northeast Ohio’s Ukrainian-American community.

“Russia has never wanted Ukraine to be a free, democratic country,” said Lyudmila “Luda” Shilo. “They want our land, our resources, our everything.”

Shilo is a resident of Parma, Ohio, was born in Kovel, Ukraine, a small city that was occupied by the Soviet Union at the time she lived there. She immigrated to the United States in 1998, and has been living in Parma since.

Shilo is one of more than 15,000 people of Ukrainian descent in Cuyahoga County who are struggling as they watch the Russian invasion of their homeland.

Ukraine and Russia have had long-standing political tensions dating back hundreds of years. In the 20th century, the Soviet Union seized control of Ukrainian agriculture, causing a man-made famine that killed millions of Ukrainians.

After the fall of the Soviet Union in 1991, Ukraine gained independence from the Soviet Union. Tensions flared in 2014 when Russia annexed Ukraine’s Crimea region along the Black Sea.

In Dec. 2021, Russia deployed over 100,000 soldiers along the Ukrainian border, and on Thursday, Feb. 24, 2022, they commenced a full-out invasion of Ukraine, first by firing missiles on military bases, airports, and civilian territories. They also deployed ground troops and air forces.

This invasion has led to fear, destruction and death, forcing over 2 million Ukrainians to flee to neighboring countries, as of March 9.

Many people ask why Russia is doing this. President Putin of Russia has falsely claimed that the Ukrainian government are neo-Nazi nationalists who are promoting Russophobia, and therefore his attack is warranted. Other sources report additional explanations including that Putin wants to re-establish the dominance it lost after the fall of the Soviet Union, prevent NATO alliance members from establishing a presence close to the Russian border and to claim control of Ukrainian land and resources.

As of March 2, 2022, Russian forces reached the edges of Kyiv, Ukraine’s capital city, and have captured Kherson, a large city in the Southern part of the country. Ukrainian armed forces, and volunteer citizens, have taken up arms and are putting up fierce resistance to this invasion.

In Ukraine, Luda Shilo obtained a Master’s degree in economics, and in the United States, she acquired an associate’s degree in accounting. She is currently retired.

Shilo has relatives who are still currently living in Ukraine. Her two cousins and their families are trying to escape to Poland. She says that some of her relatives want to stay in Ukraine and she doesn’t know how they are. She hopes that they are all safe.

“Any war is bad, it is blood, death, ruins, famine, homelessness, and fear,” she said. “When it comes to your people, even if you live so far away it is so painful and heartbreaking.”

This is the sad truth for the majority of Ukrainians because communicating with their families has been difficult and their fates are currently unknown.

It is hard for me to imagine what they are experiencing. A lot of them have families that still live in Ukraine, it is very hard to watch events unfold on television knowing that your family lives in that country.”

Ohio Statehouse Representative Jeffrey Crossman serves the city of Parma, the largest suburb in Ohio, and home to one of the largest concentrations of Ukrainians in the United States.

He says that there are multiple Ukrainian churches and various different ethnic shops that are positive additions to the community.

The Ukrainian community of Parma is also trying to support Ukraine. A large rally and prayer vigil in support of Ukraine was held on Sunday, Feb. 27. The community has daily prayer services and they donate to different organizations like the Red Cross, the International Red Cross, and multiple other ‘Go-Fund-Me’ collections that aim to get aid to people who need it.

“It is hard for me to imagine what they are experiencing,” Crossman said. “A lot of them have families that still live in Ukraine, it is very hard to watch events unfold on television knowing that your family lives in that country.”

Crossman believes that members of the Ukrainian community in Parma are concerned for their families and the country they love.

“I spoke to one woman the other day who was very emotional,” he said.  “She told me that the village her grandmother grew up in was bombed.”

“That was 20 miles from the Polish border,” he added. “This war is going on throughout Ukraine. Everybody [in the Ukrainian-American community] is impacted, especially new immigrants will feel it a lot more heavily because of their closer ties to the country.”

The biggest thing I want people to take away from this is that the Russian citizens are not to blame whatsoever, but it is Putin who has made all of this despair possible.”

A number of BHS students have Ukrainian ancestry. Sophomore Vera Kheyfets, who was born in the U.S., has strong connections to family and friends from Russia and Ukraine.

Kheyfets’ parents are both from Russia. Her mother was raised in St. Petersburg, and her father in Moscow. Their freedom was restricted due to Russia being controlled by the Soviet Union when they lived there.

Kheyfets believes that Putin is invading Ukraine to reclaim the land that was part of the Soviet Union simply because he can.

“I know it is still hard for a lot of people, especially Gen-Zers including myself, to comprehend that there is an actual war going on given how numb we’ve all become through [the] COVID-19 [pandemic], but this is real history that is happening…and it is so important to pay attention,” Kheyfets said.

Kheyfets says her extended family in Russia is terrified of the idea that their son, her cousin, may be drafted to the Russian army. Meanwhile, her family friends who live in Kyiv were unable to escape Ukraine in time due to pending papers, which would let them take their cat with them to France.

Thankfully, her aunt was able to smuggle her cat across the border of France and is safe now. This makes Kheyfets extremely happy.

Her parents prefer to not choose any sides, even though they are originally from Russia. Her father told her, “I will always be on one side and one side only and that is the side of freedom.”

“It is still difficult for me to process what is actually going on, but watching my mother cry out to her family in the midst of the bombings brings me back to life,” Kheyfets said.

“The biggest thing I want people to take away from this is that the Russian citizens are not to blame whatsoever, but it is Putin who has made all of this despair possible,” she said. “…never against the people, always against the government.”