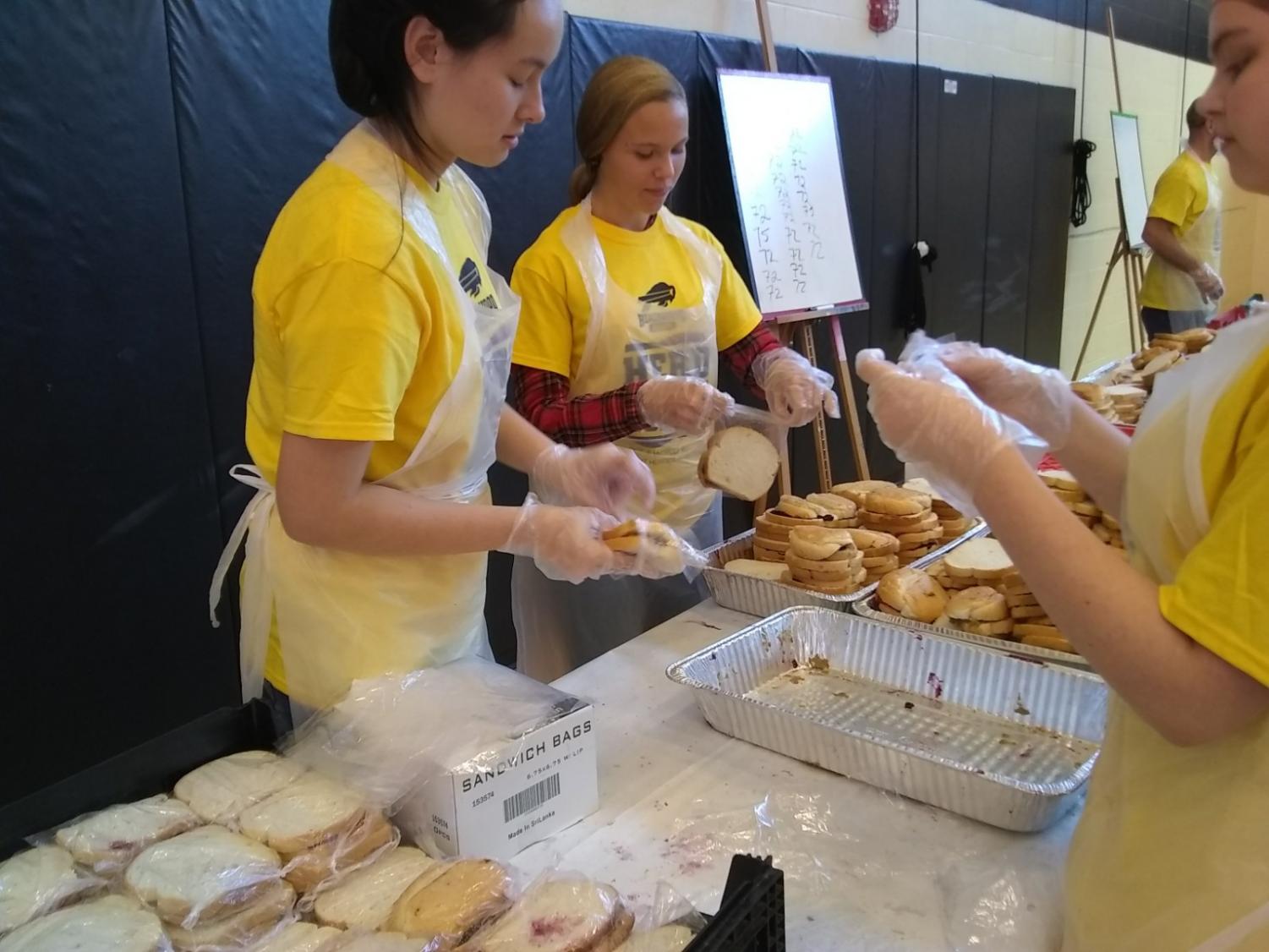 The Herd Takes on Hunger

The auxiliary gym swarmed with students, staff and parents on Sunday, Oct. 14. Volunteers wore yellow shirts, hairnets, aprons and plastic gloves. They worked in teams at rows of tables where they diligently lined bread slices in long paired lines, spread Sunbutter on one side, jelly on the other, then closed the sandwiches and stacked them for bagging and transport to the sandwich chain in the main gym.

Junior Lena Leland and Student Activities Coordinator Craig Alexander organized the Herd Against Hunger to benefit the 21% of people in Northeast Ohio who live in food insecure households.

Leland worked hard to make it happen, emailing every school in Ohio and posting about it on social media.

The gyms were crowded with 425 people coming and going throughout the day, all contributing as they could. The event was planned to run from 8 a.m. to 8 p.m., but it continued past midnight.

Official surveyors from Gutosky & Associates, Inc. checked the gym and confirmed that the record had been broken.

The Sunbutter and jelly sandwiches were made in the auxiliary gym and lined up in the big gym. The line spanned approximately 2.5 miles or 13,300 feet. After packing, they were delivered on Monday to local soup kitchens and shelters.

Sunbutter donated the Sunbutter and sunglasses, Welch’s donated the jelly, Orlando Baking Company donated the bread and AVI Foodsystems, which runs the school cafeteria, donated materials such as scoopers and hairnets.

The most rewarding part was when people came up to me and told me they felt inspired to make a change in their own community. To me, that’s what this was all about.”

“[The atmosphere was] very intense, but a good type of intense because we were all working towards the same goal,” junior Joe Spero said.

The impact of the event went beyond Beachwood. The Herd Against Hunger PR team reported a total of 175 million views on articles and broadcasts about the event.

“If even one person that saw something about it does something and makes a difference, then that’s incredibly significant,” Leland said. “We’re raising [awareness] for such a big problem in the community… I don’t want anyone losing hope and thinking that it’s just over, because we’re not going to drop this.”

Alexander said Beachwood has never done anything like this. The school intends to make Herd Against Hunger an annual event to combat the hunger problem in Ohio.

“While it’s true that one sandwich only solves one person’s hunger for a short time, the purpose of this event is to raise awareness toward figuring out a way that we can help fight this huge problem,” Leland explained.

Leland understands that hunger is not the only issue facing people in Ohio.

“Last year I did a Coats for Kids Cleveland [event], and I hope to do that again this year,” she said. “…The biggest way to help is to get out and get involved.”

Junior Jordyn Zawatsky, a member of the Herd Against Hunger leadership team, was inspired by the event.

“My favorite part was the deliveries and seeing how happy and excited people were to receive the sandwiches,” Zawatsky said.  “It felt really good to see people so happy.”

“This is really important…not only giving people sandwiches, but raising awareness so this continues to grow, and so we can help more and more people,” she added. “I will never forget this experience and how amazing it was to see people so happy to get these deliveries. It will inspire me forever.”

The line of sandwiches spanned approximately 2.5 miles or 13,300 feet. After packing, they were delivered on Monday to local soup kitchens and shelters.”

Many volunteers described the atmosphere as light and fun even as they worked hard.

“I loved how it felt like you were just hanging out with your friends and listening to music while making such a huge impact,” sophomore Ruby Cheistwer said.

Leland encourages others to make a difference and fight hunger in their everyday lives.

“The next time you eat out, bring home half of the entree and eat it the next day. Eat everything you prepare and shop with conservation instead of abundance in mind.”

Leland worked on the event for months, but she believes it was worth it.

“The most rewarding part was when people came up to me and told me they felt inspired to make a change in their own community,” she said. “To me, that’s what this was all about.”