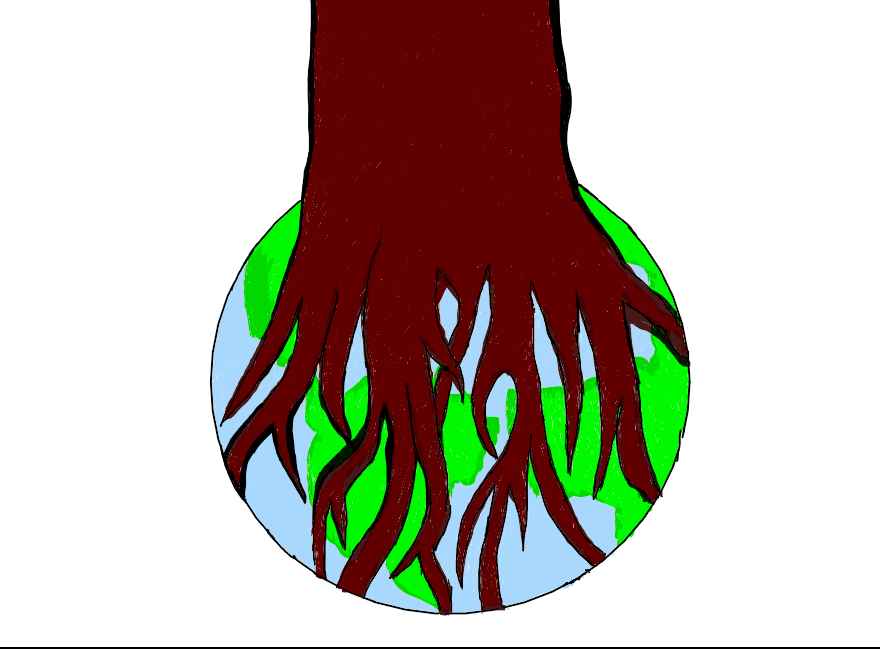 “Only with strong roots are we able to stand up steady as trees.” (Hiba Ali)

“Only with strong roots are we able to stand up steady as trees.”

BHS students are focused on our futures, yet there is much to be learned from our pasts.

Each of us has a distinctive family history that impacts us in unique ways.

These stories were highlighted recently when students responded to a Beachcomber survey about family histories.

Some students’ families came to America for better opportunities in education or employment.

Some were forced to come.

And some came to escape persecution.

Sophomore Shari Spiegel’s family fled Czechoslovakia during the Holocaust after her grandfather escaped a work camp and sought refuge in the United States.

After ‘making it’ in America, her grandfather was able to reunite with his father, whom he had been separated from.

“His story just makes me proud to be his granddaughter,” Spiegel said. “It makes everything I learned in history class about the Holocaust even more of a reality.”

“[It taught me] that we are strong and that tragedy can happen to anyone,” she added.

Sophomore Megan Wooley’s grandfather’s great aunt was a survivor of the Titanic. She was a poor teenage immigrant sailing from Finland to the United States. She was the only person in her family to survive, and eventually settled in Ashtabula, Ohio, where she spent the rest of her life.

Junior Iyonna Stewart’s family was brought to America by slave traders who forced them from Africa in chains. Later, her grandmother passed as white to protect her family.

“My father came from Hong Kong in 1978 for college and my great-grandmother left the farms of Ireland in the late 1800s,” she wrote.

One thing that I have learned is that my family will stop at nothing to provide a good education for the next generation, and themselves too. Even if it means sending your family away halfway across the globe…  I’m certainly grateful for what my family has provided me and my sister with, and I am determined not to let it all go in vain.”

Both sides faced challenges. Her great-grandmother fled a rough life for women in rural Ireland. Her father struggled with English when he first arrived.

Junior Arielle Kesselman’s family clandestinely held Sunday School in her mom’s home in Moscow, Russia when her mom was a child and celebrated Jewish holidays privately. They came to America from Ukraine and Israel in the 1990s because the Soviet Union was restricting them from practicing Judaism.

Junior Ben Lewin’s family left Berlin and fled to Israel then the U.S. in the aftermath of WWII to build a new life.

“My [paternal] grandmother and her two siblings each went separate ways due to WWII and the Holocaust,” he wrote. “While she managed to flee to Palestine, her sister fled via the Kindertransport and was raised Catholic on the Isle of Man. Their brother survived a concentration camp and managed to flee to Australia where he later started a family along with a successful career.”

Junior Fernando Durães came with his family to America in 2013 from Brazil in search of a better education for himself and his younger sisters.

Sophomore Kaylee Morin’s dad and uncle came from Mexico in 1997 for a better life and to help support their family in Mexico.

Sophomore Ehima Ogor’s family came mostly from Nigeria during the 1980’s and 90’s to pursue better opportunities for themselves and their children.

“My mom and dad’s stories of how he made a living here off of almost nothing and how he and all of their siblings and parents value education above all else [are important to me],” Ogor wrote.

Senior Alhameedi Alenezi’s family came from Kuwait in 2012 for education and also so his father could pursue a PhD.

“My family stories that are important is how they survived the Iraq war,” he wrote.

Senior Kanrry Kang’s family came from China in 2005 for work.

“My dad’s side definitely taught me to persevere and to be determined,” he said.

Sophomore Lea Sokol’s father’s side came from Poland and her mom’s side from Israel when her maternal grandmother married an American.

My family’s past has taught me that I come from many different places, each unique in their own ways and each with a unique culture, and all together, they make up me.”

“At first, my parents moved from India to England to seek a higher level of education,” she said. “Then in 2012, we all moved to the U.S. because of the job opportunities for my parents.”

“It has impacted me… because I’ve learned how I fit in as an Indian girl in this diverse community,” she said. “Yet, I have numerous relatives who still live in India, whom I feel very distant from because I don’t get to visit them very often.”

“Most of the family traditions revolve around the holidays, especially this festival that is called Onam,” she continued. “No matter where in the world we are, we always try to spend time with our family and eat a lot of traditional Indian food. The importance of this festival and all of the other holidays is that we strengthen our connection with all of our relatives. ”

“I’ve learned from my family’s past that no one takes our family’s culture and traditions for granted because it is the foundation of our identity.”

Sophomore Leah Yakubov’s mom is from El Salvador, and her father’s family is from Russia. Her mother came to the U.S. for work as a teenager.

“Their hardships [they faced when] growing up [are important to me],” she wrote. “When they were kids they felt safe, and now it’s really different where they come from.”

Sophomore Claire Weaver’s mom’s side of the family is Italian and Slovak. They came to America through Ellis Island. Her father’s ancestors were German soldiers working for England during the Revolutionary War.

“My Slovak ancestors lived in Slavic Village in Cleveland,” Weaver wrote. “They stayed there for a long time, and they ran a small Slavic Grocery store.”

Sophomore Zachary Kornspan’s family came in the 1900’s from Europe in search of the “American Dream.”

“One really important story to me is my grandfather’s story,” Kornspan wrote. “He was a Holocaust survivor. He had so much courage and determination to do what he accomplished. He faced huge amounts of adversity in his life, and he was able to overcome all of that and have a beautiful family.”

Junior Neha Chellu’s family is Indian in ethnicity, but came to America from New Zealand. They came in 2007 in pursuit of “better jobs and an improved lifestyle.”

I’ve learned from my family’s past that no one takes our family’s culture and traditions for granted because it is the foundation of our identity.”

“My parents, my brother and I came to America from Belarus because the government there is basically a dictatorship, and there were ultimately no opportunities for them there,” she wrote. “They also wanted my brother and I to have better futures.”

Sophomore Alice Anastos’s family is from Greece–mostly from the Peloponnesian Peninsula and Sparta. They came to America in the early 20th century in search of a better life.

Her grandmother was raised by her mother and uncle because her father died before she was born. To make money, they rented out rooms in their house and her two elder sisters shared a room.

They celebrate holidays, such as Pascha–the Greek version of Easter–when they eat lamb and spanakopita and crack red-dyed eggs together.

“My family’s past has taught me so much about my personal identity,” she said. “I love attending Greek festivals with my dad, watching the dancers and eating traditional food. My family’s shared Greek heritage has brought us together and taught us to overcome obstacles together.”

Freshman Samah Khan is the first American in her family. They came to America for work but had to return to Pakistan to take care of her paternal grandfather. After eight years, they returned to America two-and-a-half years ago.

“I believe that in Pakistan, the culture and values were so deep and rich that I feel like rather than being in another country, I am on another planet entirely,” she wrote. “Since my whole family resides there, I feel as if I’m in some kind of boarding school in America, rather than being a resident of Beachwood.”

“The school curriculum there is so much more intense compared to our laid-back attitude here in the States,” she added. “My friends back home have shared so much more of my life with me, so I like to think that coming here has impacted me and changed me for the better, but the memories of home nag at me almost every day.”

“One thing that I have learned is that my family will stop at nothing to provide a good education for the next generation, and themselves too,” Khan continued. “Even if it means sending your family away halfway across the globe…  I’m certainly grateful for what my family has provided me and my sister with, and I am determined not to let it all go in vain.”

When we take the time to reflect on our pasts, we can realize the beauty of our roots, and that only with strong roots are we able to stand up steady as a tree.

Each of us have pasts that show us who we are, that show us we’re not all different, that show that even if our families faced painful experiences, that out of that pain can grow something beautiful, such as freedom and pride and love. They show that there may be horror in the past, but all is never lost.

Although they suffered misfortunes, they persevered; so must we, and just like they were able to find peace and build a future for their families, so can we.