Daryl Houston Leads Bison to Victory in First Round of Playoffs 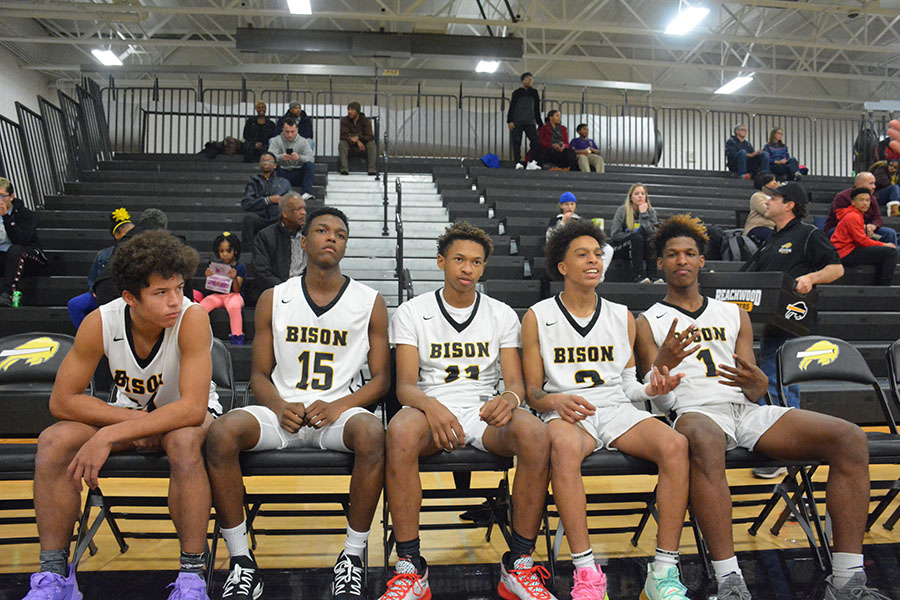 The Bison boys basketball team began their playoff run with a dominating win at home Tuesday night against the MLK Crusaders 92-56.

Before the game, Houston emphasized the importance of focus.

“I think we need to take it one game at a time,” he said. “We need to play our game, stay focused and keep our intensity on defense.”

“Our confidence is high after the big win [101-64], and it was a great way to end the regular season and head into the playoffs,” he said.

Houston reflected on the difference in play from the beginning of the season until now.

“We made a lot of changes,” he said. “We changed some plays, switched our defense, and our chemistry is just better [from the beginning of the season].”

The game started off with a bang as Daryl Houston jumped up for a one-handed slam putting MLK on notice right off the bat.

The Bison played tremendous defense in the first quarter, only allowing MLK to score 11 points.

Houston continued his performance as he racked up 14 points, nearly 60% of the team’s points in the first quarter, leading the Bison to a 24-11 advantage going into the second quarter.

The Bison continued to dominate through the second quarter with Houston notching 24 points, but he was not done yet.

With three seconds left in the quarter, the point guard got the ball, ran down the court and chucked up a near half-court shot at the buzzer.

Anyone with their eyes closed would have been able to tell that the ball went in. The crowd went crazy.

Houston finished the first half with 27 points, and the Bison led by a score of 45-29.

At halftime, junior Delanti Jackson reviewed the Bison’s strengths in the first half.

“We scored well, and played really good defense,” he said.

Jackson also emphasized what he thinks the team needed to do better to maintain their lead through the second half.

The Bison did not let up in the second half. Sophomore Jalen Minter came to life as well, scoring 22 points through the first three quarters, bringing the Bison to a 70-43 lead at the end of the third.

According to OHSAA rules, in sectional games, the clock must keep running if a team is up by 30 points or more. However, if the score differential falls under 30 points, the clock will go back to stopping after violations.

In the face of the blowout, in the last few minutes of the game, MLK threw up three-pointers from all over the court, just having as much fun as they could before their season came to a crashing end.

Finally, the buzzer sounded, signaling the Bison advance to the Sectional Finals.

Junior guard Maurice Jones reflected after the game on what the team did right.

“We executed on defense and scored easy in transition,” he said.

He also focused on things that the team needs to improve on moving toward their next game.

Jones also looked ahead to their next game on Friday night at Warrensville Heights.

“It will be tougher because their crowd will try to give them the momentum, but if we stop their [best] player, we should be onto the next round,” he said.