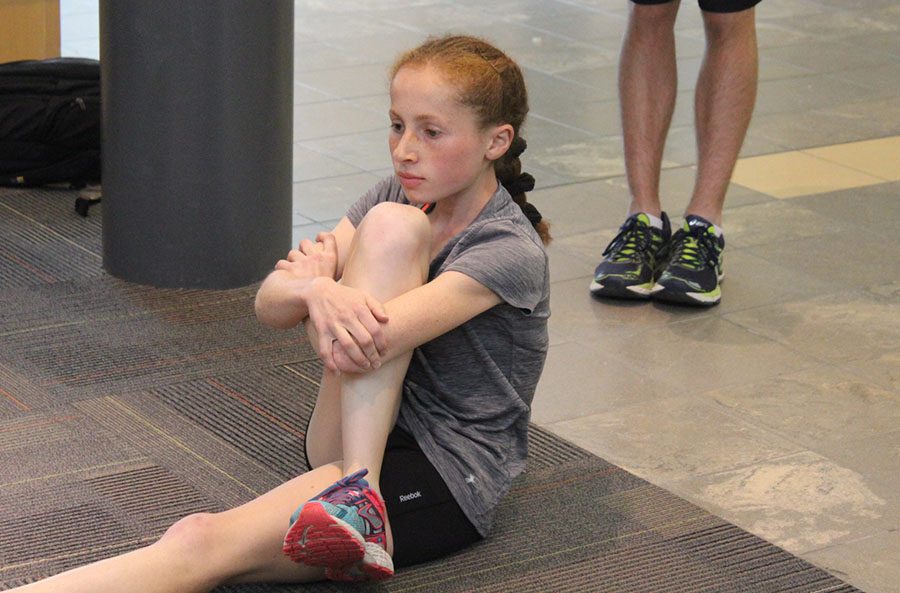 Junior Leah Roter is one of the fastest girls in the state. But you’d never guess it until you see her run. She is soft spoken, short-statured and humble.

“I work hard, and running just suits me for who I am,” Roter said.  “I’m able to push the limits, and I think that’s what matters.”

Last year, Roter placed an impressive 7th place at the state meet in Columbus, and she is currently the fastest cross country girl in Ohio after an amazing time of 17:36 in the 5k at this year’s Kenston meet.

However, she does not get caught up in the attention she has garnered from her success.

“I think [the attention’s] pretty good, but at the same time there’s going to be other girls that want to run faster than me, so I just have to stay focused and motivated to push myself even harder,” Roter said.

But back before these huge achievements, Roter was just an eighth grader who wanted to run. She began running track when others told her that she would be very fast. Even this early, high school cross country coach Jamie Lader could see her potential.

“I saw [Roter] run when she was an eighth grader, and I could just tell by the way she was running, what her form looked like–not a lot of training–that she could potentially be a very good cross country runner,” Lader said.

Roter did not run cross country in eighth grade, but began the next year.

During the summer before ninth grade, Roter ran at a camp, but it was “nothing serious.”  Lader seemed to think differently about Roter’s freshman year. He realized she was a star in the Kenston race of her freshman year when she ran a 5k in an impressive time. Roter is also four or five inches shorter than most girls, which most would assume would be a disadvantage, but Roter remains on top, regardless.

Starting in tenth grade, Roter ran every other day of the summer.  This past summer, she focused on increasing her mileage and endurance to be ready for this season.

During the cross country season, Roter practices with the team, sometimes focusing on distance, other times on speed.  For speed, Coach Lader commented that Roter needs to improve on her finish.

“Leah needs to finish stronger–she tends to hold her pace, but her last 500 meters need more of a kick,” Lader said.

So far, this season has gone very well for Roter, as she has won every meet she has run.  She also has not had any major injuries during her years running cross country.  Even though she may seem invincible, Roter works hard to focus for each meet.

“I get nervous…seeing my competition, but that doesn’t stop me from trying to run my best,” Roter said.

Roter may get nervous, but her competition may be more nervous to see her.

“If you ask me if she intimidates other runners, especially the girls who run with her in the meets, heck yeah!” Boys’ cross country captain Jack Spero wrote in an email.

People may think that after running a 5k, one would be completely exhausted–Roter is just the opposite.

“I feel [satisfaction after finishing a race]…I feel like I could do anything,” Roter said.  She also still has energy after finishing races, giving her the comfort that she can run even faster.  Even when she gets tired, she is motivated by her coaches, teammates and spectators.

In addition to cross country, Roter is also well-known for her achievements in track. She runs the mile and the two-mile races, but she wants to improve her speed for both. She placed fourth last year at states for the two-mile.

“[Cross country and track] are both different in their own ways, but personally, I think I like cross country better because of the different terrain we get to run on,” Roter said.

As girls’ cross country captain, Roter has the responsibility to keep morale up in the team and lead her teammates.

“I think Leah’s the type of kid who more or less leads by example, she’s a great example of ‘hard work pays off,’ and I think that’s starting to be very well known,” Lader said.

Lader also mentioned how Roter’s strong work ethic motivates her teammates to work harder.  She also cares deeply for her teammates and is always rooting for them, making her a “great all-around athlete.”

“[Roter] takes running very seriously and always strives to always ‘get the extra mile’ in…Watching what she can accomplish, I myself have pushed myself to run longer too,” Spero wrote.

Lader highlighted how proud he was that Roter always “tries so hard to do well,” and never makes excuses to miss practice or meets. She is always prepared and ready to run, and her conscientiousness is also very high.

“She’s the best girl [on cross country] we’ve ever had by far,” Lader said.

There is no doubt about that, but Leah would not have gotten this far without hard work and perseverance.

“I’ve had to make many sacrifices for running, but once I look back and see all that I’ve accomplished, I realize it was all worth it,” Roter said.