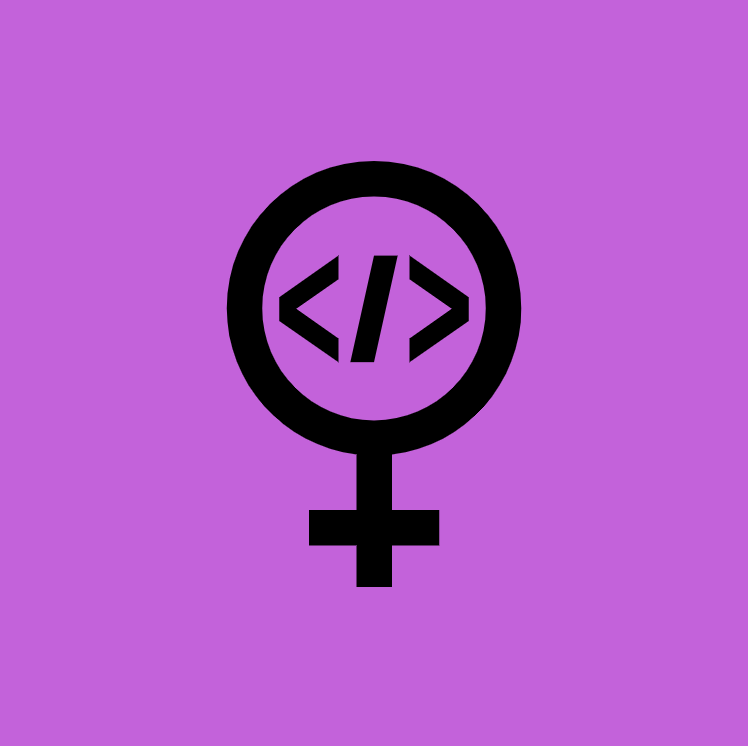 There is a relatively large gender gap in six of the BHS technology and engineering classes: AP Computer Science, AP Physics C, Honors Robotics, Intro to Design and Honors Design Engineering I and II.

According to the Census Bureau, women make up 48% of all workers in the United States, but only 27% of jobs in the STEM workforce. Men in STEM are also paid almost $15,000 more than women, and Black and Latinx women in STEM are paid around $33,000 less, according to a study by the Pew Research Center.

At BHS there is not a large gender gap in most Advanced Placement STEM classes, according to a class breakdown provided by the BHS guidance department.

However, there is a relatively large gender gap in six of the technology and engineering classes: AP Computer Science, AP Physics C, Honors Robotics, Intro to Design and Honors Design Engineering I and II.

This gap parallels that in universities and the workforce. Only about 21% of engineering majors are women, and around 19% of computer science majors are women, according to a report by the American Association of University Women.

Junior Samah Khan, who is the president of Beachwood’s Women in STEM club, discusses the club’s goals to address this gap.

“We have partnered with student council to create a gender-parity goal for the 2025-2026 academic year,” she said.

“We are hoping to raise awareness and make other female students more comfortable in trying these courses,” science teacher and women in STEM adviser Lisa Bugenske said.

Recently, the number of female students in many of Beachwood’s higher-level STEM classes has been growing.

“This year I have Honors Robotics, AP Environmental Science, and AP Physics 1,” Bugenske said.  “There is only really a gender gap in honors robotics.  When I first started teaching at Beachwood I had sections that had no females at all.  Now I usually have about 10-15%, so still a ways to go.  I’m always so happy when I see girls in the class.” 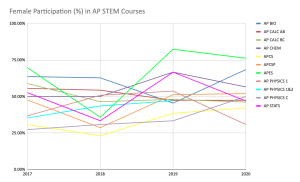 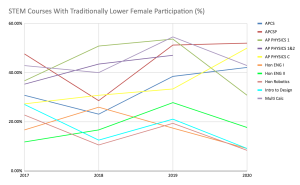 Outside of BHS, men exceedingly outnumber women in undergraduate programs, with only 38.6% of STEM undergraduates being women.

One of the reasons that the STEM gender gap continues to exist is because there is a lack of representation for young girls that are interested in STEM fields. A 2018 study by the Geena Davis institute showed that men in STEM were more prominently featured as leading characters and villains than women in STEM in film and television. The study also found that out of the leading STEM characters, only 2% of these leads were by women of color, compared to 11.1% by white women.

Both of these examples along with many others can push the narrative that men’s stories are more worth telling. When young girls don’t see people like themselves working in STEM fields in the media, they can lose hope or be unmotivated to participate in STEM-based activities.

In addition, the STEM gender gap continues because of gender stereotypes and bias.

“Girls and women internalize the stereotype of STEM being for men, and this, coupled with experiences of gender bias from parents, teachers, and professors, discourages many from pursuing a STEM career,” The American Association of the University of Women found.

“Parents, teachers, toys, social norms, and media representations all play a part in discouraging girls and women from entering into STEM fields,” the Geena Davis institute reported. Therefore, negative stereotypes along with gender bias play a leading factor in discouraging women from working in the STEM field.

The BHS women in STEM club is trying to address this issue by creating recruitment videos to attract girls to classes with low female enrollment.

“We will present the video to the 8th grade students and make them available to any high school student that is interested,” Bugenske said.

“My goal is to have an engaging, aesthetically pleasing video that will accurately inform generations of future women in STEM, for this year and years to come,” Khan said.