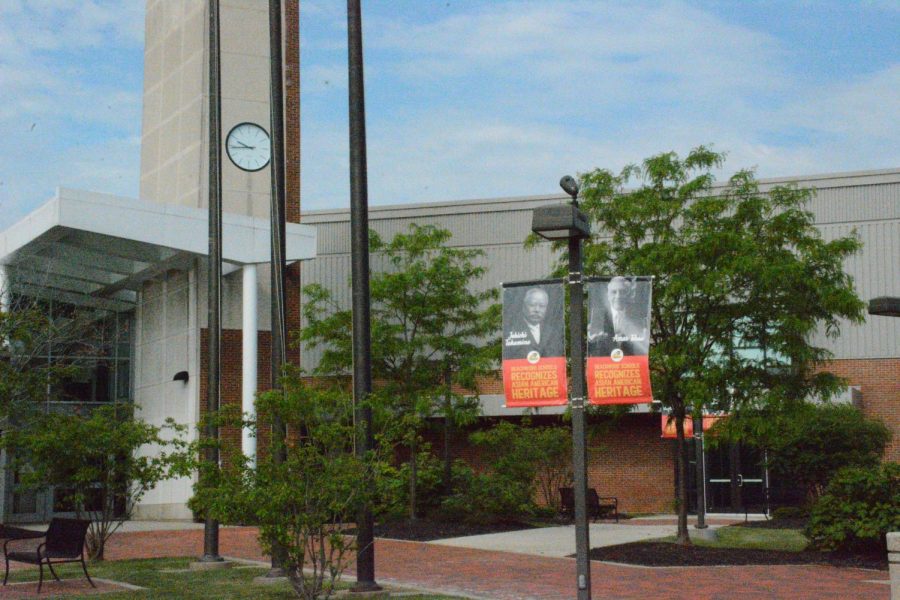 In May the district is honoring Asian American role models.

In the past several months, students have seen banners hanging on the light posts outside of Beachwood school buildings. The faces and names rotate monthly to honor the district’s diverse cultures and identity groups.

“The project is a part of Beachwood Schools’ efforts to recognize and honor the diversity of our community through a variety of activities and displays,” Director of Equity and Engagement Kevin Houchins wrote in an email. “We hope that students, families and staff will take great pride in this visible representation of diversity and be inspired to learn more about one another.”

“Overall, the response has been extremely positive from the community,” Houchins added. “A couple of parents mentioned how they look up the people featured on banners while waiting in line to pick up their kids.”

Houchins explained that while he proposed the idea, there are many people who have helped to see these monthly banners come about, including Director of Grounds and Maintenance Brian Koss and Administrative Assistant to the Superintendent Julie Felder.

Technology Teachers Craig Alexander and Chris Croftcheck have been printing and sewing the banners in the high school.

The individuals honored on the banners have been selected based on recommendations from teachers, students, and the Parent Equity and Engagement Team.

One example of a person honored during these months was Congressman John Lewis, who was featured during Black History Month.

Lewis was one of the “Big Six” leaders of the civil rights movement, who went on to serve more than 30 years in Congress.

In 1965 Lewis led 600 protesters over the Edmund Pettus bridge in Selma, Alabama. The group was assaulted by police who knocked Lewis and other protesters to the ground and beat them.

The incident  was called Bloody Sunday, and the actions by law enforcement were broadcasted, bringing national attention to voting rights. While recovering in the hospital, Lewis called on President Lyndon Johnson to take action to pass the Voting Rights Act.

“Take a long, hard look down the road you will have to travel once you have made a commitment to work for change.” Lewis said. “Know that this transformation will not happen right away. Change often takes time. It rarely happens all at once. In the movement, we didn’t know how history would play itself out. When we were getting arrested and waiting in jail or standing in unmovable lines on the courthouse steps, we didn’t know what would happen, but we knew it had to happen.”

Sophomore Samah Khan, who is part of the high school Equity & Engagement Team, explained how she and others have approached the selection process.

“I think it was a great way to get involved with worldly affairs when the world itself wasn’t wholly available.” Khan said. “We wanted to make sure that the people were relevant but also that their presence in these kinds of events wasn’t overused…we also made sure to include and adequately celebrate the accolades of unsung heroes.”

Though the reactions from the community have been positive overall, an issue did occur in February, when J.K. Rowling was honored on a banner in front of the high school.

Rowling’s Harry Potter series has sold over 500 million copies, making it the best-selling book series in history, making Rowling one of the world’s richest self-made women.

Given her accomplishments and the influence of her books on young readers, it is no surprise that Rowling was selected to be honored during Women’s History Month.

However, in recent years, Rowling has become more controversial as she has repeatedly spoken out against transgender rights.

“When you throw open the doors of bathrooms and changing rooms to any man who believes or feels he’s a woman-” Rowling wrote on her website, “and, as I’ve said, gender confirmation certificates may now be granted without any need for surgery or hormones- then you open the door to any and all men who wish to come inside.”

With the help of GLAAD, the Gay and Lesbian Alliance Againsts Defamation, and the Trevor Project, an orgainization providing crisis intervention and suicide prevention services to lesbian, gay, bisexual, transgender, queer, & questioning youth, MuggleNet, a major Harry Potter fan community made a statement regarding the issue in support of the trans community.

“Although it is difficult to speak out against someone whose work we have so long admired, it would be wrong not to use our platforms to counteract the harm she has caused…,” MuggleNet stated. “We stand with Harry Potter fans in these [trans and non-binary] communities, and while we don’t condone the mistreatment JRK has recieved for airing her opinions about transgender people, we must reject her beliefs… We are committed to doing better work in our community to uplift and center the people who have been marginalized and create positive change within out fandom platforms.”

Some Beachwood students were bothered by the Rowling banner.

“It was uncomfortable,” said one genderfluid student who wishes to remain anonymous. “It felt like I’m not valued and like the school is proudly displaying a person who hates who I am.”

Once this issue was brought to the attention of the administration, they worked to amend the situation and moved the banner to a less prominent position.