In a Lonely Year, Many Find Comfort in Quarantine Pets 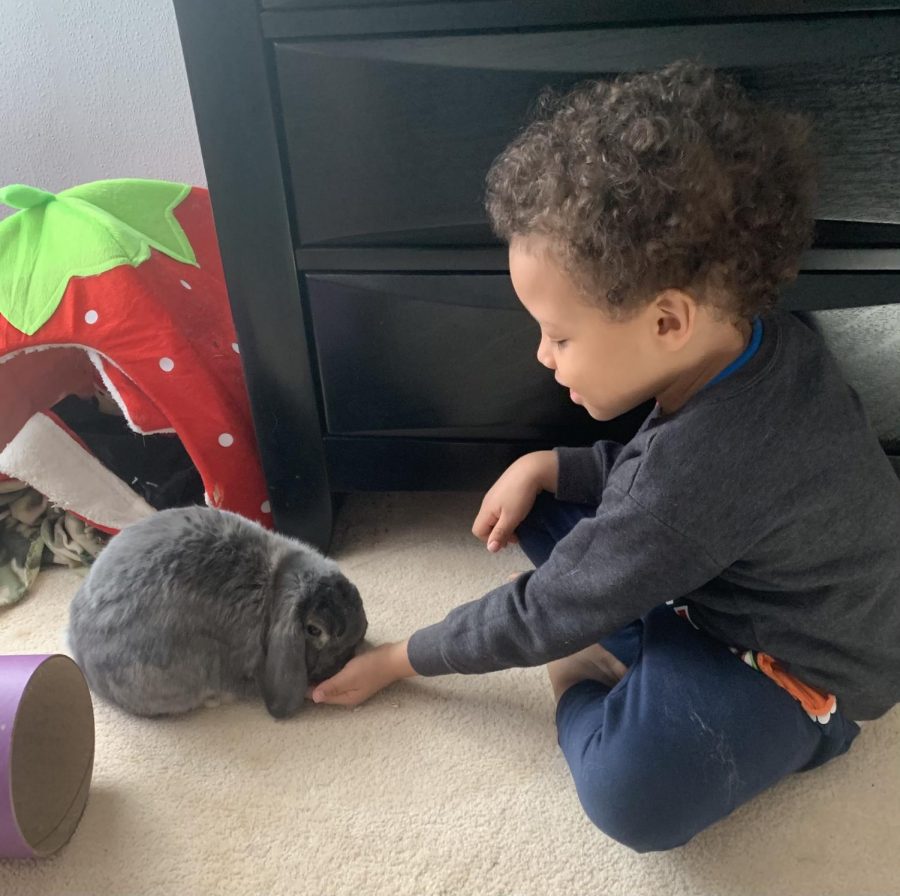 A teenage girl sits on her bed. She is logged into class when her baby bunny comes into her room and looks at her with big, pleading eyes, begging for a lift.

The big-eared gray rabbit settles down on the edge of her bed, sits on her lap or keyboard, or nudges her hand with its head, pleading for some strokes.

This is what Junior Sarah Carrington’s baby Holland Lop rabbit Max often does. Adopted over the winter, Max is a soft, fluffy stress relief for Sarah.

During the pandemic year, many people have been spending more time at home, and many Beachwood students have gotten pets to keep them company.

“I wouldn’t say I was feeling lonely, but I had just been struggling with taking care of myself and my mental health,” Carrington said. “I figured that if I had something that would rely on me it would help.”

Studies suggest that even within the first few months of quarantine, people reported dramatic increases in feelings of loneliness and depression.

“At this point I am used to everything,” Carrington said. “But I think the pandemic has made me a lot less social, and I tend to self isolate.”

“Believe it or not, Max loves to interact with me,” she added. “And I’ve been home so much I feel bad [about] the idea that I will be gone for most of the day when everything goes back to normal.”

Senior Bridgitte Feldman’s family adopted a puppy, Sammy, a pitbull and German shepherd mix, from the Animal Protection League in January. Like Carrington, she worries about leaving her pet alone when she is no longer spending time with him at home.

“We’ve never left Sammy alone since he was abandoned, and he has some trauma that we have to keep in mind,” she said. “In the coming weeks, we’re planning on leaving him for 5-10 minutes at first and then slowly lengthening the amount of time he is left alone.”

“Hopefully this will ensure that he knows we’ll be coming back and he’ll be more calm when he is alone,” she added.

Feldman says there were multiple factors that went into her family’s decision to get a dog.

“I had been asking for a dog because we’re all at home and I’m bored,” she said. “Our last dog passed in June, so we’d all been feeling like the house was empty.”

“It was always the plan to get another dog, but I think we got one sooner than we would have because of COVID,” she added.”

“I got Mashy because I wanted a bird, even before corona started,” Allen said. “I think the pandemic has made it somewhat easier to take care of him because there is more time to spend with him when I would normally be in school.”

According to the American Society for the Prevention of Cruelty on Animals, on average, about 3.2 million pets are adopted annually nationwide.

The pandemic has impacted pet adoptions in a number of ways.

The Washington Post reported in August that dog adoptions and sales rates were “soaring” and that some shelters were seeing increases of up to double their usual rates.

24PetWatch reports that during the period of March to December of 2020, there was a 24% decrease in dog and cat adoptions, but that there was a 19% increase in animal fostering families.

Big Paws Large Breed Rescue is a nonprofit organization in Cleveland that rescues and houses animals until they can be adopted.

“On average [we]house about 20 dogs that are adopted out at a given time, but with COVID, these numbers have gone down a lot,” Big Paws Large Breed Rescue owner and founder Katabra Windham said.

“[We] had to stop accepting dogs because the donations of food and other dog items had just stopped. We couldn’t afford to feed so many dogs,” she added.

Adoption procedures often depend on the shelter. Some shelters require interviews, paperwork, and/or background checks and home checks. The intensity and depth of these steps are left to the discretion of the shelter or agency that a person is looking to adopt from.

The coronavirus has impacted these procedures, as people are recommended to remain socially distanced while adopting animals. Interviews have been changed to a virtual format, paperwork is either mailed or submitted online, and home checks are difficult to set up.

24PetWatch indicated that these extra hurdles may be impacting the statistics.

Luckily for those who are looking to adopt from Big Paws Rescue, the process isn’t that long and complicated.

“[Due to Covid] all meet and greets have to be done outside, and everyone must wear a mask,” Windham said. “All paperwork is done via email or fax.”

Though the process is not very long, the Big Paws Rescue is unable to initiate adoptions at the rate they were able to before the pandemic, and is also struggling due to lack of funds and donations.

“We’re just hoping that since the [stimulus] bill has passed,” Windham said. “[Then] maybe we [could] get a grant or [more] donations…so that we’re able to get back on our feet and running at full capacity.”

There is also a financial aspect to consider for a pet adoption. While shelters and agencies often charge a fee for adopting a pet, there are other costs associated with taking care of animals. Items like food, cages, crates, leashes and veterinary visits add up quickly.

According to Business Insider, the average annual cost for owning pets are often more expensive than owners expect. A bird or a guinea pig is about $300, a rabbit about $500 and dogs and cats can cost anywhere from $700- $1000+ depending on the age, breed and whether or not you have owned a dog or a cat before.

Covid-19 has put significant financial stress on many Americans. Big Paws Rescue has had dogs returned by people who did not think through the commitment they were making.

Meanwhile, Carrington is enjoying spending time with her new pet.

“He[Max] has helped me out a lot during COVID,” Carrington says. “I kind of just wanted a responsibility to take care of something again. It helps me take care of myself as he relies on me for everything. I wasn’t really planning to get a pet before the pandemic but I’m really glad I did.”

Like Carrington, Feldman is enjoying spending time with Sammy, her puppy, “I was going through a really rough time when we got Sammy and I think he came into my life at the perfect moment. He makes every day more fun and he has brought a lot of joy into my family. We are very lucky to have gotten him.”