J. K. Rowling and the Tirade of Transphobia

Using stickers to fight Hogwarts School for Bodyshaming and Bigotry 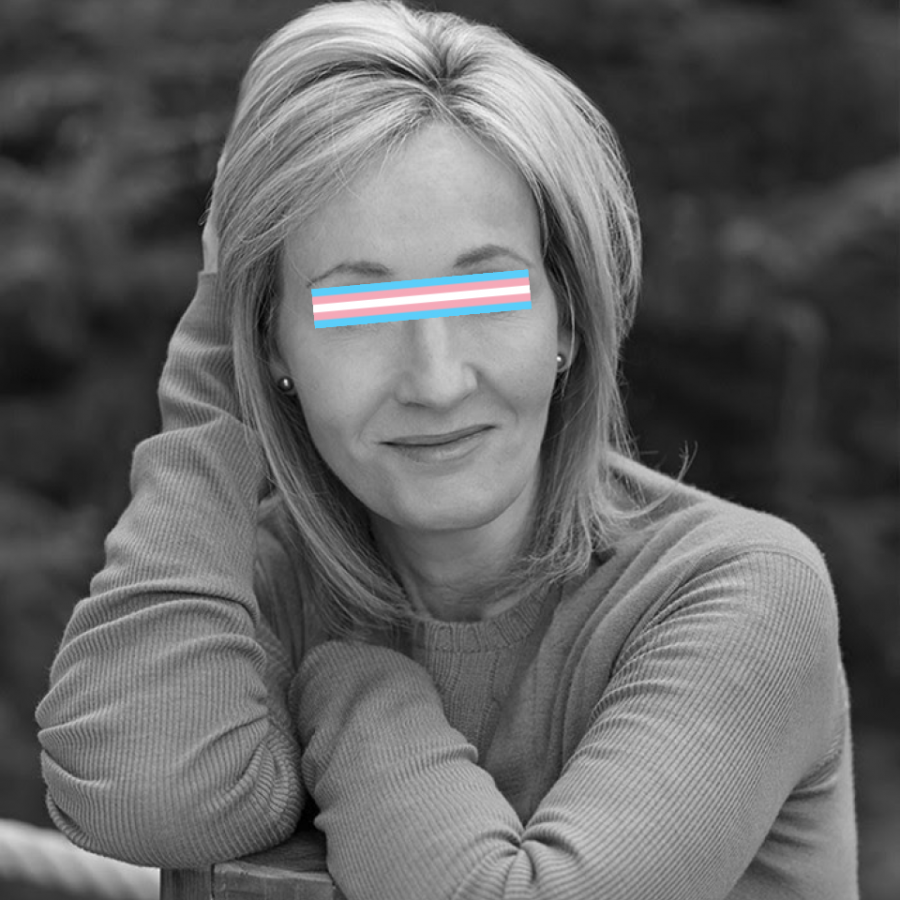 Image adapted from photo by S.macken6 from Wikimedia Commons.

In 1997, J. K. Rowling published the first book in the Harry Potter series. This seven-part saga sold 500 million copies worldwide, making it the best-selling series in history, and making Rowling the wealthiest author in history. Even more impactful was Harry Potter’s penetration of not only its contemporary popular culture, but of the childhood of a generation. Rowling is, for many of us, the architect of an influential and magical world of literacy with which we grew up, and which we treasure to this day.

Rowling has always been controversial in LGBTQIA+ circles. Her ex post facto Carnegie Hall proclamation that Albus Dumbledore is gay, while lauded by some as groundbreaking, is today regarded as an instance of “gaybaiting” (feigning queer representation for profit).

Another controversy surrounded Rowling’s insistence that the werewolves in Harry Potter were meant as an allegory for people who are HIV positive. If this is true, then the sadistic werewolf Fenrir Greyback, who takes pleasure in biting children, is a degrading portrayal of someone with HIV; if false, it is a manipulative and egoistic move.

Rowling’s more casual, blink-and-you’ll-miss-it homophobia turned into full out bigotry when she came out as a TERF (a trans-exclusionary radical feminist).

“Dress however you please. Call yourself whatever you like. Sleep with any consenting adult who’ll have you. Live your best life in peace and security. But force women out of their jobs for stating that sex is real? #IStandWithMaya #ThisIsNotADrill.”

The woman who was “force[d] … out of their [job] for stating that sex is real” is Maya Forstater. Following debate over a possible amendment to the UK’s Gender Recognition Act, which has allowed trans people to declare their gender on passports (rather than retain the gender they were assigned at birth), Forstater expressed her disapproval that people would “avoid saying the truth that men cannot change into women (because that might hurt mens [sic] feelings)”.

A tax expert for the think tank Center for Global Development, Fostater was fired for a series of hateful, transphobic tweets. Forstater attempted to counter at an employment tribunal by arguing that her “‘gender critical’ opinions; in outline, that sex is immutable, whatever a person’s stated gender identity or gender expression” were a protectable philosphical belief (In U.K. employment law, a “philosophical belief” usually refers to religious identity). Two individuals with whom she worked, however, testified to harassment and misgendering from Forstater. The legitimization of harassment and intimidation by a shoddy reading of feminist theory is somewhat emblematic of TERF ideology.

Many people have ridiculed the backlash that this seemingly innocent tweet has spawned. Some scoff at “cancel culture” and sardonically label her “the next person the internet is mad at”. This comes from a general misunderstanding of the situation. Conceding that the internet is prone to overreact, shame, and otherwise malign people for genuine mistakes, it must be noted that this is not a minor slip-up on Rowling’s part. This tweet is a veritable attack against transgender people, and part of a long series of efforts to make the world less safe for transgender people everywhere.

Perhaps due to the insistance of TERFs to brand TERF as a slur, few people know what a Trans-Exlusionary Radical Feminist is. Counterintuitively, TERFs are neither radicals nor feminists; they are a fringe group of misogynistic cis women who validate their transphobia by masquerading as feminists. TERFs opine, contrary to every major feminist group, that transgender women are men who want to force their way into women’s spaces. For more on TERFS, I recommend Natalie Wynn’s video Gender Critical (a euphemism for TERFS used by TERFS), which goes into further detail.

At the end of the day, TERFs seek to lend intellectual, feminist weight to the stigmatized and falacious notion that trans women are actually men. This fallacy, one that is quite common outside TERF circles, is the same fallacy that leads to the “trans panic” defense, that is, when someone justifies murdering a trans woman by saying that she “tricked” the murderer into flirting or sex. According to the LGBT Bar, only eight of the United States have banned the trans panic defense, and only seven others have had bills introduced banning the defense. TERF ideology, thus is not a harmless, quirky dogma. It is gleefully complicit in the murder of transgender people.

In summary, Person A held a belief that transgender people were invalid, and, on top of that, actively harassed the trans people they worked with. Then, Person B (Rowling) publicly came to their defense, using the rhetoric of a concerned citizen warning of an oncoming disaster. This is most comparable, in my opinion, to President Trump’s pardoning of “Sheriff” Joe Arpaio. Did Trump, like Arpaio, abuse inmates, implement racially discriminatory policing practices, and brag about operating a “concentration camp”? No, but his public endorsement of “Sheriff Joe” is pretty transparently an affirmation of that revolting behavior.

It is shocking that a person who seemed to bring so much magic into the world holds such bigoted beliefs. However, the consensus of democratizing nations, however debatable, is that (within reason), people have the right to be bigots. J. K. Rowling does not deserve to be imprisoned, harassed or immolated for her toxic beliefs. However, nowhere does it say that we should or must continue to allow the Harry Potter books to help Rowling gain fame and influence, which can be turned against marginalized people at a time when they are in need of support, validation and just legislation.

Millions of Harry Potter books sit on library shelves. This forces us to consider a number of unsettling questions: Is an endorsement of Harry Potter an automatic endorsement of Rowling? Should our concrete desire to protect and stand with LGBTQIA+ people override our abstract desires for a free and unbiased space of discourse?

“Professional librarians go through library school, and part of that is studying ‘the selection process’, or ‘collection development’,”  librarian Angela Maxwell explained. “Much how curators work to curate exhibits at museums, librarians are curators when we go through the process of deciding what should be in our library.”

Harry Potter should not be weeded. It is a wonderful book that should be left for future generations to enjoy. But some context should be added.

Some people believe placards should be appended to statues of Jefferson Davis and other Confederate political and military leaders (hundreds still remain in the United States), providing the important context of those figures’ support of and engagement with slavery, dissuading adoration.

Similarly, I think a sticker should be added on the inside front cover of every book by J. K. Rowling which condemns her bigoted beliefs and provides resources for trans and queer readers. One such sticker, which could be used by our BHS library and serves as a template for other libraries, is displayed below. 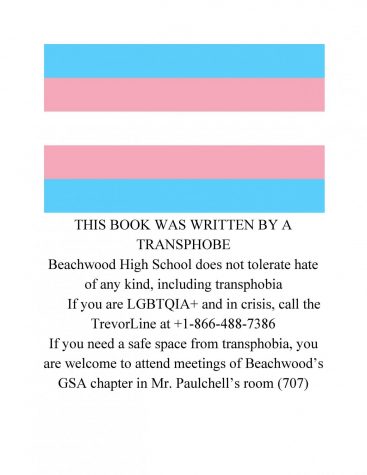 Such a sticker will not be appended to Harry Potter books in our library any time soon; Maxwell argues that doing so is bad policy.

“A label on a book is censoring,” she explained to me. “Would we make a different sticker for Sherman Alexie’s books because he sexually harassed multiple women?  If so, some readers might never have read a book that talks about firsthand experiences of an indigenous high school student.”

While I respectfully disagree with Mrs. Maxwell, I believe it is important for people to be cognizant of Rowling’s dangerous rhetoric. So please, continue enjoying Harry Potter. But do everything you can to help trans people while doing so.