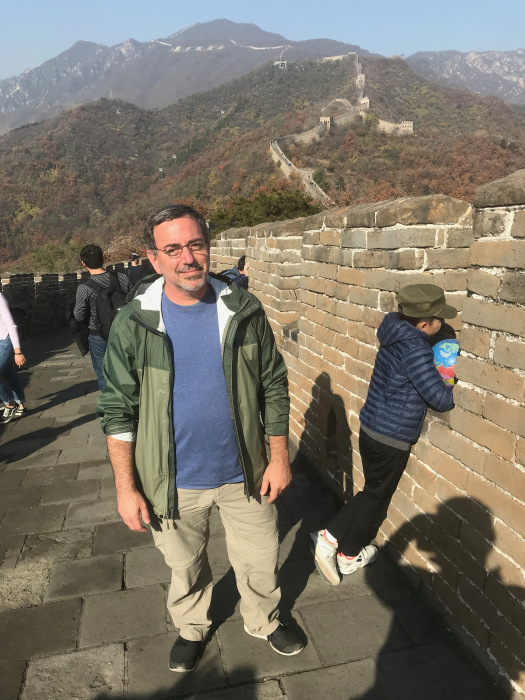 Gugick at the Great Wall of China

Beloved math teacher and LEGO artist Arthur Gugick and his partner Barbara Becker were killed on March 30 when a pick-up truck that ran a red light hit an Uber in which they were passengers.

The news was sent via email to students and parents late Sunday night in a message from Principal Tony Srithai and Superintendent Dr. Bob Hardis. It detailed the preparations made by the school to offer grief counseling for students and faculty to be available during school hours throughout the week.

“[We] will pull together… to support Mr. Gugick’s family and to support one another through difficult circumstances,” the message said.

BHS held a memorial service on the morning of April 3 in the auditorium. The memorial, while sad in nature, was truly a celebration of Gugick’s life. Before it began, screenshots of comments made on Beachwood’s Facebook page about Gugick showed how far-reaching his impact was with students, alumni and parents all expressing their love for the late teacher and describing how he changed their lives.

These speeches were heartwarming and showed the impact Gugick had on BHS students and faculty. Many of the speeches were almost lighthearted as speakers recalled Gugick’s humor. Many fond memories were shared.

“[During an active shooter drill, Gugick instructed his students to] make three rows of students between [him] and the shooter, because the show can’t go on without [him],” Velotta said.

Speaker after speaker detailed the ways Gugick had fooled colleagues and students alike, from convincing the school that the courtyard would be turned into an aquarium to telling his class that it was his birthday in March, for which they then planned him a party and brought food to class, when his birthday was actually in January.

“Gugick spoke in such a way that whatever he said, you’d believe it,” Leland said.

But it wasn’t all about his humor, because there was so much more to him. Sopronov detailed one of the proofs that Gugick had been working on, making sure that everyone knew that if it was ever solved, the credit would be owed to Gugick. Kaminski shared different ways we could all pay tribute to Gugick, by ‘stopping to smell the roses’ in honor of Gucick’s love of nature or by being more honest like he was.

In reality, Gugick was eating lunch with a student with disabilities because they had no one else to sit with. Kaminski encouraged those present to reach out to people who don’t have any friends, just like Gugick did.

Beyond speaking to his general intelligence, speakers at the memorial spoke of Gugick’s emotional intelligence. Ward described the time she was struggling with her mental health and Gugick tried to better understand her situation. He asked, “What does it feel like to be you?”

She said, “no one had ever asked me that before,” adding that his simple act of empathy was something she’d never forget.

Balog, whose speech was delivered by Matthews, also reflected on Gugick’s emotional depth.He recalled a moment in college when Gugick asked, “Everyone comes to you with your problems, who do you go to?”

“I can’t help but think that if he were [at the memorial], he’d be making fun of us and asking if anyone had a job,” she added.