The Case Against Gender 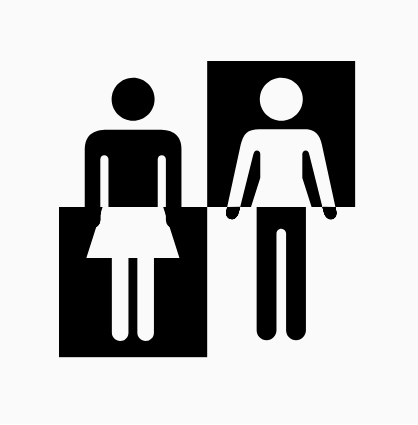 Image by A.L. Hu, US via thenounproject

Twice a year, BHS students are subject to a tradition that ranges from ludicrously frustrating to somewhat amusing. The Top 12 Assembly, with its over-the-top costumes and great longevity, has always left a bad taste in my mouth, but that mainly has to do with the way it depicts gender.

By virtue of hosting two separate assemblies: one for the Top 12 girls of the school and the other for the Top 12 boys, the entire school is invited to a perverse and sociologically curious peek into the pants of the Top 12. How ludicrous is it truly that the shape of one’s genitals is the deciding factor in whether they are eligible for Homecoming Queen and Prom King?

Of course, this is a symptom of a larger problem in society: the way gender—a social construct that is restrictive by nature—insists on dictating the lives of everyone everywhere. At BHS, gender affects not just which 12 you might be considered senior year, but also which sports you may play, which locker rooms you may use, which Macbeth character you must write stage directions for and which restroom you may (not) Juul in.

Broadening our scope to society as a whole, we see other tyrannies of gender, from wage discrimination to toxic masculinity.

In this way, intersex individuals (people born with ambiguous genitalia), as well as genderqueer individuals (anyone who prefers to identify as non-binary or as a combination of male and female) become fully comfortable and fully justified in identifying any way they see fit.

The mass societal segregation of people on the basis of gender is also perpetuated in many languages by the existence of the “grammatical gender,” a construct that enforces different grammatical standards on the basis of gender. Not only does the “grammatical gender” stress gender divisions overabundantly, it can potentially alienate genderqueer individuals in that many languages lack the option of gender-neutral verbs. As we fight for gender equality, as well as for the rights of genderqueer and transgender individuals, we must ask ourselves whether such a thing can ever occur without the complete abolition of gender.

The problem is that gender is restrictive by nature. The human brain puts things into groups to better understand them, but the immense diversity of human personality cannot be tightly organized into any number of gender identities. The desire to find a gender identity that one is comfortable with is truly conformity—if not to traditional gender roles, then to the very notion that anyone needs a gender identity in the first place.

A secondary problem arises from the fact that for many of us, a gender is chosen for us by our parents when we are born. Those who realize later in life that their personality dictates a different identity are required to come out as non-binary or transgender.

No matter your stance on the usefulness of gender as a concept, this behavior is objectively restrictive in that it dictates a child’s identity without first consulting the child. Everyone is, by the laws of the society we’ve built, either a baby boy or a baby girl. This has nothing to do with the child’s identity; it is, if anything, indicative of society’s perverse obsession with private parts. However, parents who take the (perfectly fine) decision of not enforcing a gender on their children are the objects of unjust and unrelenting ridicule.

The instinctive counterpoint to a global de-genderification is the “fact” that females can have babies and males cannot. Wouldn’t a person who wants children wish to know whether or not their prospective significant others has ovaries or testes?

This argument falls apart because many people, male and female, cannot have children. We don’t make women switch bathrooms after they receive a hysterectomy, nor do we force impotent men to use different pronouns. Why anyone would have to disclose their ability to have children in casual conversation is beyond me.

What if then every single parent raised their children without enforcing a restrictive gender-identity on their child? What if gender-based pronouns and all facets of grammatical gender linked to sociological gender were purged from common speech? What if we stopped advertising certain toys to girls and certain toys to boys? A society that has no concept of gender is a society in which people are allowed to be who and what they are without having to conform to any sort of generalized gender-structure.

It’s a tall order. But we could make it work.