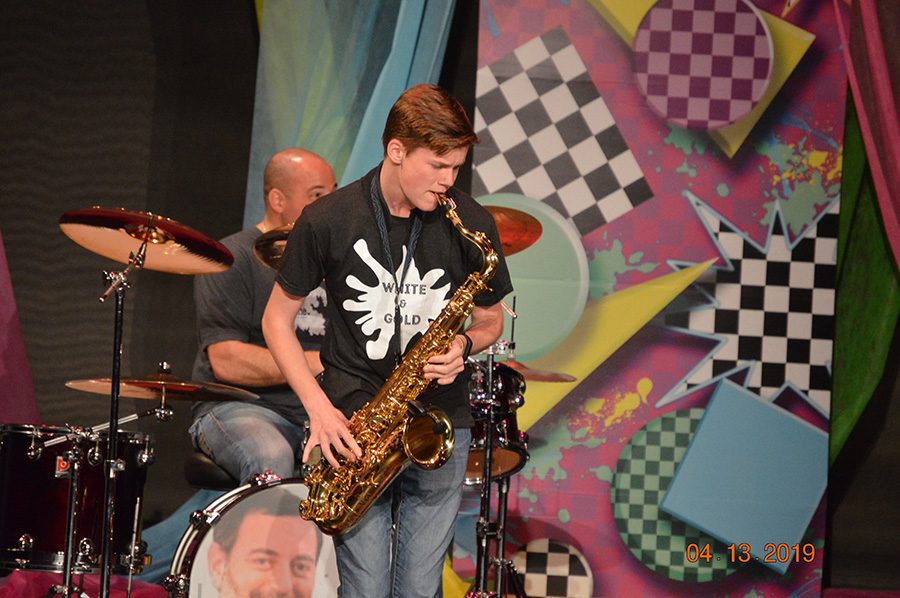 Ben Bosler (Class of 2021) performing with the teacher band at the last in-person White & Gold show in 2019.

The  annual BHS talent show White & Gold will return on April 30 after a two-year break from the stage.

“It’s sort of a mixture between a talent show and a variety show,” White & Gold adviser Meghan Sullivan said. “The hope this year is to have staff involvement in many of the skits.”

The show was canceled entirely in 2020, and in 2021, only a digital version of the show was released. Beachwood students are excited to enjoy an in-person show once again this year.

This year’s show will include guitarists, singers, pianists and comedians. The student directors are seniors Aaliyah Edwards, Brooklyn Bennett, Dustin Chizek and Christian Bowling. These directors are the emcees of the show and will write a few skits themselves. Sullivan co-advises the show along with choir director Darlene Haight.

The traditional ‘teacher’s lounge’ skit will also be returning to the stage, where students portray  teachers during a staff meeting, party, or typical day in the lounge. The 2021 White & Gold show featured a staff meeting on Zoom.

“It’s definitely something to look forward to,” Sullivan says in regards to the skit.

The Beachwood cheer team will return as well as the famous Teacher Band with some new members and new instruments.

In addition to these return acts, junior Ben Lawrence will perform stand-up comedy, sophomore Probir Mukherjee will sing and play guitar and junior Josh Kahn  will make the music for a special video.

“[Junior] Ja’Niya Rhaman and [freshman] Rachael Kantarovich are two acts that stood out to me,” Sullivan said.